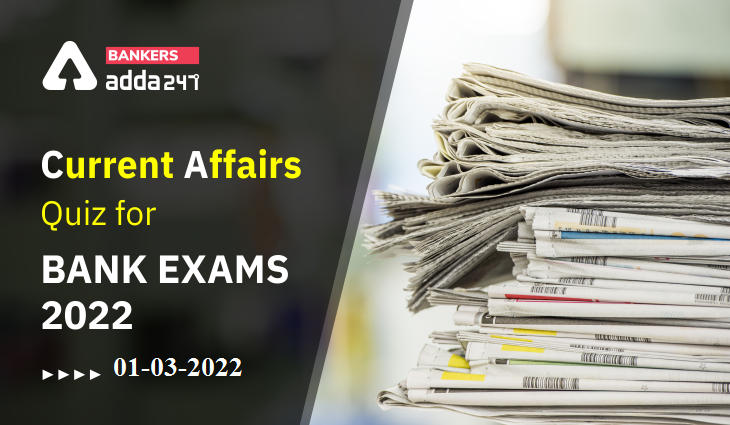 Q2. India has pulled out from which of these multilateral exercises in 2022, amid growing crises in Ukraine?
(a) Sea Breeze
(b) Cobra Warrior
(c) Desert Knight
(d) Shared Destiny
(e) Operation Sniper

Q8. What is the theme of 2022 National Science Day?
(a) Future of STI: Impact on Education Skills and Work
(b) Integrated Approach in S&T for Sustainable Future
(c) Women in Science
(d) Science for Nation Building
(e) Scientific Issues for Development of the Nation

Q9. Operation Ganga was launched to bring back Indian nationals from which country?
(a) Iran
(b) USA
(c) Russia
(d) Ukriane
(e) Afganistan

Q12. Which of the following country in the world that has authorized the use of a plant-based COVID-19 vaccine?
(a) Japan
(b) China
(c) India
(d) USA
(e) Canada

S1. Ans.(d)
Sol. In India, February 27th is celebrated as the National Protein Day, to create awareness about protein deficiency and encourage people to include of this macronutrient in their diet.

S2. Ans.(b)
Sol. The Indian Air Force (IAF) has decided not to send its aircrafts in the multilateral air exercise ‘Cobra Warrior-22’ in United Kingdom, due to the deepening crisis in Ukraine, arising out of the Russian military attack in that country.

S3. Ans.(d)
Sol. World NGO Day is celebrated every year on 27th February in several countries across the world. Non-Governmental Organizations or NGOs work in the upliftment of society.

S4. Ans.(c)
Sol. In 2022, the Government of India has organised the Polio National Immunization Day 2022 (NID) (also known as ‘’Polio Ravivar”) on February 27, 2022, to give two drops of oral polio vaccine (OPV) to every child in the country under the age of five.

S9. Ans.(d)
Sol. India has launched an evacuation mission named Operation Ganga to evacuate Indian nationals from Ukraine due to the Russia-Ukraine tension.

S12. Ans.(e)
Sol. Canada became the first country in the world that has authorized the use of a plant-based COVID-19 vaccine.

S13. Ans.(c)
Sol. The Delhi Cabinet has approved setting up India’s first of its kind electronic-waste eco-park. It has also agreed to devise ‘Delhi Film Policy 2022’, as a thrust to promote tourism.