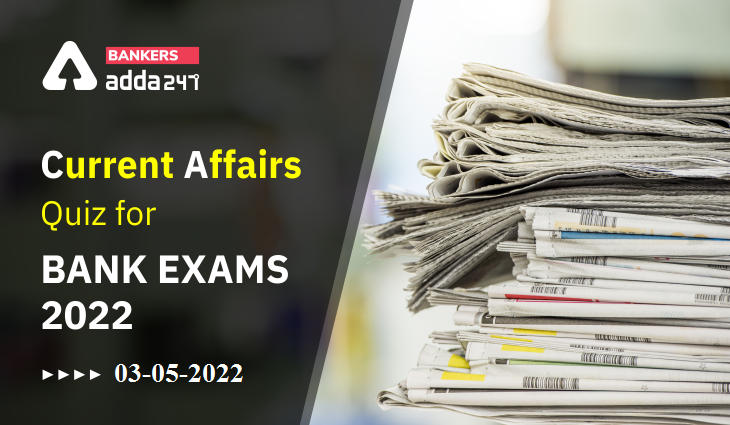 Q3. Who among the following has been appointed as the Vice Chief of the Army Staff?
(a) V R Chaudhari
(b) BS Raju
(c) Manoj Kumar Mago
(d) P K Purwar
(e) Manoj Pande

Q7. Which of the following state observed its statehood day on 1st May?
(a) Manipur
(b) Mizoram
(c) Telangana
(d) Maharashtra
(e) Mizoram

Q11.Which of the following has recently announced a collaboration with the C-DAC, an autonomous scientific society of the Ministry of Electronics and Information Technology (MeiTY), Government of India?
(a) Microsoft
(b) Google
(c) Accenture
(d) Infosys
(e) Qualcomm

S2. Ans.(d)
Sol. ICICI Bank has launched India’s first comprehensive digital ecosystem for all Micro, Small and Medium Enterprises (MSMEs) in the country, which can also be used by the customers of other banks.

S3. Ans.(b)
Sol. The Indian Army’s Director General of Military Operations, Lieutenant General Baggavalli Somashekar Raju has been appointed as the Vice Chief of the Army Staff from May 1.

S5. Ans.(a)
Sol. International Labour Day is observed globally on 1st May every year. It is also known as International Worker’s Day and May Day.

S6. Ans.(d)
Sol. Union Bank of India became the first public sector bank to go live on the Account Aggregator (AA) ecosystem. Touted as the UPI moment for lending, the AA framework ensures swift data sharing with the consent of the user and eliminates the need for physical documents.

S9. Ans.(b)
Sol. World Laughter Day was first celebrated in 1998 in Mumbai and was initiated by the founder of the Laughter Yoga Movement Dr Madan Kataria.

S10. Ans.(b)
Sol. World Tuna Day is observed globally on 2nd May every year. This day is established by the United Nations (UN) to raise awareness about the importance of tuna fish.

S11. Ans.(e)
Sol. Qualcomm India will be conducting a Qualcomm Semiconductor Mentorship Program 2022 for select startups from the semiconductor space in India.