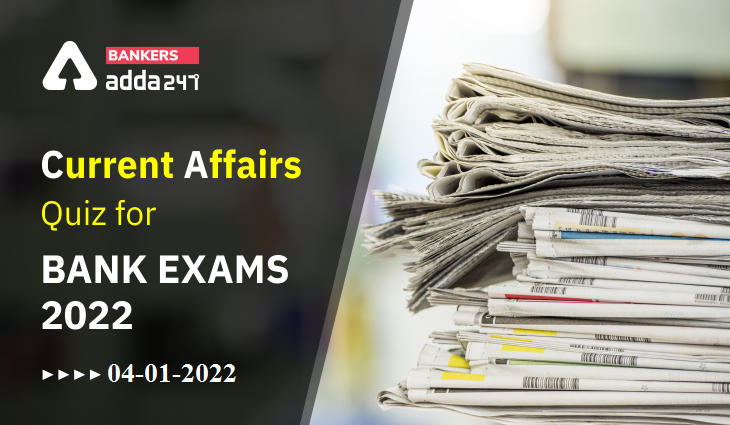 04th December Current Affairs 2022: Here, we are providing the 04th January Current Affairs Quiz. These types of topics are important for candidates who prepare for Bank Exam 2021. In this article, we are covering the following topics Headlines:

Q1. Which state has become the first state in the country to launch Digital Life Certificate system for pensioners?
(a) Karnataka
(b) Gujarat
(c) Odisha
(d) Kerala
(e) West Bengal

Q7. SBI Cards and Payment Services has collaborated with which company to enable their cardholders to tokenize their cards on devices and make payments?
(a) CCAvenue
(b) PhonePe
(c) Amazon Pay
(d) Paytm
(e) BharatPe

Q9. Who among the following took over as the 24th Director General of Indian Coast Guard?
(a) P S Ranipse
(b) VS Pathania
(c) Surjeet Singh Deswal
(d) Udayan Banerjee
(e) Rajesh Ranjan

Q15. Which of the following compnay is set to acquire 100% stake in Allyis India and Green Investments?
(a) TCS
(b) Infosys
(c) CTS
(d) Wipro
(e) Tech Mahindra

S2. Ans.(a)
Sol. Shanghai has opened two new metro lines, upholding its rank as the city with the largest Metro network in the world.

S4. Ans.(e)
Sol. Photojournalist Danish Siddiqui, who died during an assignment in Afghanistan, has been posthumously awarded as the ‘Journalist of the Year’ for 2020 by the Mumbai Press Club. CJI N V Ramana presented the annual ‘RedInk Awards for Excellence in Journalism’.

S7. Ans.(d)
Sol. SBI Cards and Payment Services has collaborated with Paytm to enable their cardholders to tokenize their cards on devices and make payments through Paytm.

S8. Ans.(a)
Sol. Vinay Kumar Tripathi (1983 Batch of Indian Railway Service of Electrical Engineers) has been appointed as new Chairman and Chief Executive Officer of Railway Board with effect from January 1, 2022.

S11. Ans.(e)
Sol. Prime Minister Narendra Modi layed the foundation stone of Major Dhyan Chand Sports University in Meerut. The University will be established at Salawa and Kaili villages of Sardhana town in Meerut at an estimated cost of about 700 Crore rupees.The University will have the capacity of training 1080 sportspersons including 540 female and 540 male sportspersons.

S12. Ans.(c)
Sol. Defence Research and Development Organisation is celebrating its 64th foundation day. It was on this day(Jan1st) in 1958 when DRDO was formed to make India strong and self-reliant in terms of science and technology and especially in military technologies.

S13. Ans.(a)
Sol. Education Minister Dharmendra Pradhan will launch 100-day Reading Campaign ‘Padhe Bharat’. The reading campaign aims to have participation of all stakeholders at national and state level including children, teachers, parents, community and educational administrators.Children studying in Balvatika to grade eight will be part of this campaign.

S15. Ans.(e)
Sol. Tech Mahindra has approved a proposal for the acquisition of a 100 per cent stake in Allyis India and Green Investments, for a total consideration of up to USD 125 million.