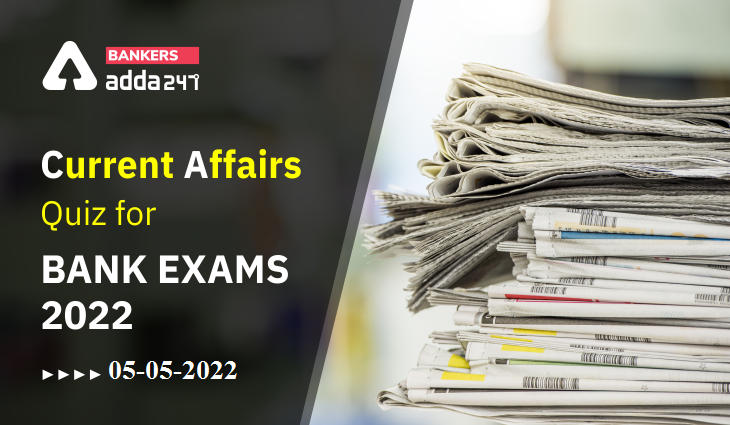 The Current Affairs section constitutes a major part of the General Awareness section in a competitive examination and plays an instrumental role. To supplement your preparation for the General Awareness Section of the upcoming exams like IBPS PO/Clerk Mains, SBI PO Mains and SEBI Grade A Prelims, we are providing you Current Affairs Quiz of 05th May 2022 covering the following topics Headlines: World Asthma Day, World Press Freedom Day, Santosh Trophy, Real Madrid, Goods and services tax, Central Board of Direct Taxes.

Q9. Who among the following has been appointed as Chairman of Central Board of Direct Taxes (CBDT)?
(a) M Ajit Kumar
(b) Sangeeta Singh
(c) J B Mohapatra
(d) T V Narendran
(e) Vivek Johri

Q11. What was the theme of World Asthma Day 2022?
(a) Enough Asthma Deaths
(b) You Can Control Your Asthma
(c) Allergy and Asthma
(d) Uncovering Asthma Misconceptions
(e) Closing Gaps in Asthma Care

Q14. What is the theme of World Press Freedom Day 2022?
(a) Keeping Power in Check: Media, Justice and The Rule of Law
(b) Information as a Public Good
(c) Media for Democracy: Journalism and Elections in Times of Disinformation
(d) Journalism under digital siege
(e) Media’s role in advancing peaceful, just and inclusive societies

S4. Ans.(c)
Sol. World Press Freedom Day is observed globally on 3rd May every year. It is also known as World Press Day.

S6. Ans.(b)
Sol. World Asthma Day is observed every year on the first Tuesday of May to spread awareness and care about asthma in the world.

S9. Ans.(b)
Sol. Sangeeta Singh, an Indian Revenue Service (IRS) officer from the 1986 batch, has been appointed as Chairman, Central Board of Direct Taxes (CBDT), with effect from May 02, 2022.

S10. Ans.(d)
Sol. North Atlantic Treaty Organisation (NATO) exercise, Defender Europe 2022 (DE22) and Swift Response 2022 (SR22) began on May 01, 2022 aimed at building preparedness and interoperability between Allies and partners of the United States (US) and NATO.

S14. Ans.(d)
Sol. This year’s World Press Freedom Day theme “Journalism under digital siege,” spotlights the multiple ways in which journalism is endangered by surveillance and digitally-mediated attacks on journalists, and the consequences of all this on public trust in digital communications.

S15. Ans.(c)
Sol. The Reserve Bank of India’s central board has approved the nomination of Rajiv Ranjan as a member of the monetary policy committee. Ranjan replaces Mridul Saggar, who retired last month.