Directions (6-8): Study the data carefully and answer the questions accordingly.
There are ten members in a family of three generation with three married couples. R is the aunt of W and is unmarried. V is married to Q who is the daughter-in-law of L. N is the mother of S who is the brother of R. F is the nephew of S. V is the father of Z who is the granddaughter of L. W is the son of O. N has three children.

Directions (9-10): Study the following data carefully and answer the questions accordingly.
A family has nine members with two married couples. C is the wife of I. F is the mother of E. M is the grandfather of G. E is the mother of D. G is the daughter of C who is the sister of H. E is the only sister of I. J is the father of E.

Directions (11-15): A word number sorting machine when given an input of word and numbers, rearranges them in a particular manner step by step as indicated below till all the words and numbers are arranged. Givenbelow is an illustration of this arrangement.

And step 8 is the last step of the above input, as per the rules followed in the steps given above; find out in each of the following questions the appropriate step for the given input. 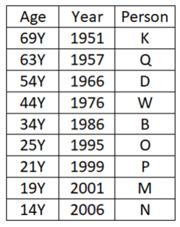 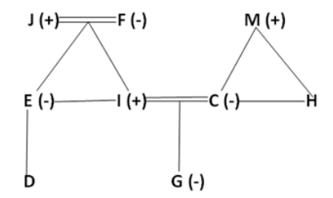