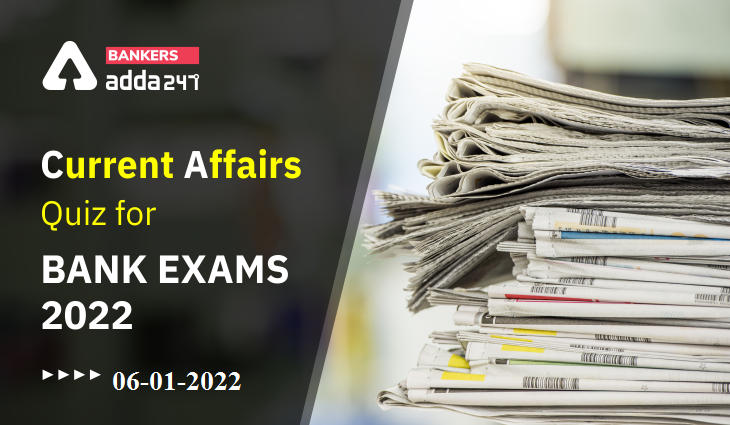 06th December Current Affairs 2022: Here, we are providing the 06th January Current Affairs Quiz. These types of topics are important for candidates who prepare for Bank Exam 2022. In this article, we are covering the following topics Headlines:

Q2. Richard Leakey who has passed away recently was a world renowned conservationist and fossil hunter from which country?
(a) Nigeria
(b) Sweden
(c) United Kingdom
(d) Kenya
(e) Sudan

Q3. ONGC has roped in first ever female as the CMD of the company on an interim basis. Name the new interim CMD?
(a) Deepa Chadha
(b) Reena Jaitly
(c) Alka Mittal
(d) Manisha Pathak
(e) Dolly Pant

Q4. Abdalla Hamdok has recently resigned as the Prime Minister of which country?
(a) Rwanda
(b) Turkey
(c) Somalia
(d) Iran
(e) Sudan

Q5. Ministry of Education has recently announced a new initiative to provide the best-developed ed-tech solutions and courses to students on a single platform. What is the name of this solution?
(a) NIPUN 3.0
(b) PRAGATI 3.0
(c) SARTHAQ 3.0
(d) NEAT 3.0
(e) NEET 3.0

Q14. Which of the following state has declared itself a child marriage free district, the first in the State?
(a) Madhya Pradesh
(b) Odisha
(c) Gujarat
(d) Maharashtra
(e) Rajasthan

S3. Ans.(c)
Sol. Alka Mittal, Director (HR), ONGC, has been given the additional charge as the new interim chairman and managing director (CMD) of Oil and Natural Gas Corporation (ONGC), the largest oil and gas producer in India.

S4. Ans.(e)
Sol. The Prime Minister of Sudan Abdalla Hamdok has announced his resignation on January 02, 2022.

S5. Ans.(d)
Sol. The Union Minister of Education Shri Dharmendra Pradhan launched National Educational Alliance for Technology (NEAT 3.0), and regional language textbooks prescribed by AICTE, on January 03, 2022. NEAT 3.0 aims to provide the best-developed ed-tech solutions and courses to students on a single platform. It will be beneficial especially among the economically disadvantaged students.

S6. Ans.(a)
Sol. The Losar Festival in Ladakh is celebrated at the onset of the New Year in the traditional schedule of Tibetan Buddhism. It is celebrated by the Buddhist Community in the Ladakh region.

S9. Ans.(b)
Sol. Zishaan A Latif won Ramnath Goenka Award in the Photo Journalism category. He won the award for his photo essay, The arduous struggle for inclusion in the NRC, which was published in The Caravan in October 2019.

S10. Ans.(a)
Sol. CryptoWire, a global crypto super app which is a special business unit of TickerPlant, has announced the launch of India’s first index of Cryptocurrencies – IC15, which is a rule-based broad market index by market capitalisation.

S14. Ans.(b)
Sol. Odisha’s Ganjam has declared itself a child marriage free district, the first in the State. The district administration has been able to stop as many as 450 child marriages and video-record 48,383 marriages in two years — 2020 and 2021.

S15. Ans.(e)
Sol. The D-SIBs banks are classified into 5 buckets. Bucket 1, Bucket 2, Bucket 3, Bucket 4 and Bucket 5. With Bucket 5 being the most important followed by rest in decreasing order.