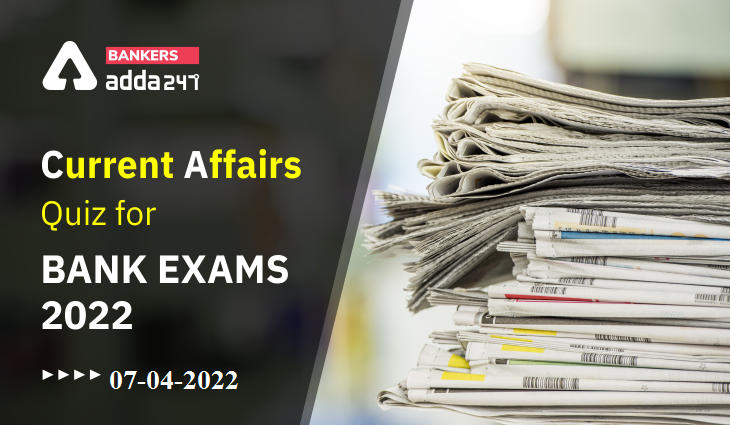 The Current Affairs section constitutes a major part of the General Awareness section in a competitive examination and plays an instrumental role. To supplement your preparation for the General Awareness Section of the upcoming exams like IBPS PO/Clerk Mains, SBI PO Mains and SEBI Grade A Prelims, we are providing you Current Affairs Quiz of 07th April 2022 covering the following topics Headlines: Prakriti, Gangaur festival, Chameli Devi Jain Award, Hurun Richest Self-Made Women in the World, Stand-Up India Scheme.

Q1. Ministry of Environment has released a mascot and various initiatives for Plastic Waste Management (PWM). What is the name of the mascot?
(a) Parivesh
(b) Vikalp
(c) Prakriti
(d) Kavach
(e) Nivesh

Q8. United Nations has declared which day to be observed as the International Day of Sport for Development and Peace (IDSDP)?
(a) First Wednesday of April
(b) April 05
(c) April 06
(d) April 02
(e) First Tuesday of April

Q10. Gangaur festival is celebrated in which of the following state?
(a) Assam
(b) Uttarakhand
(c) Andhra Pradesh
(d) Bihar
(e) Rajasthan

Q12. Name the journalist from Mumbai, who has been awarded with the Chameli Devi Jain Award for an Outstanding Woman Mediaperson 2021.
(a) Vartika Shukla
(b) Rizwana Hasan
(c) Leena Nair
(d) Aarefa Johari
(e) Kiran Mazumdar-Shaw

Q14. What is the theme of the International Day of Sport for Development and Peace 2022?
(a) Inclusion Means
(b) Inclusive Quality Education for All
(c) Promoting the Culture of Peace with Love and Conscience
(d) Securing a Sustainable and Peaceful Future for All: The Contribution of Sport
(e) Fair Digital Finance

Q15. Who among the following has topped the “Hurun Richest Self-Made Women In The World 2022”?
(a) Fan Hongwei
(b) Wu Yajun
(c) Wang Laichun
(d) Radha Vembu
(e) Kiran Mazumdar-Shaw

S1. Ans.(c)
Sol. The mascot named ‘Prakriti’, will spread awareness among people about small changes that can be sustainably adopt in our lifestyle for a better environment.

S3. Ans.(d)
Sol. The State Bank of India (SBI) has signed a Memorandum of Understanding (MoU) with the Border Security Force (BSF) to provide solutions for financial security to BSF personnel through the Central Armed Police Salary Package (CAPSP) Scheme.

S4. Ans.(b)
Sol. The Government of India has appointed IFS Vinay Mohan Kwatra as the new Foreign Secretary of India.

S5. Ans.(a)
Sol. The United Nations General Assembly has designated 5 April to be observed as an International Day of Conscience every year.

S7. Ans.(b)
Sol. A book titled ‘Queen of Fire’ has been authored by award-winning children’s writer and historian Devika Rangachari.

S8. Ans.(c)
Sol. The International Day of Sport for Development and Peace (IDSDP) is observed annually on April 6. The day is a means to celebrate the power of sport which can drive social change, community development and foster peace and understanding.

S9. Ans.(e)
Sol. Stand-Up India scheme has completed its six years on 5th April 2022. Under the Stand-Up India Scheme, over 30,160 crore rupees have been sanctioned to more than 1 lakh 33 thousand 995 accounts since the launch of the Scheme.

S10. Ans.(e)
Sol. The Gangaur festival is celebrated in Rajasthan and some parts of Madhya Pradesh, Gujarat, and West Bengal.

S11. Ans.(c)
Sol. Falguni Nayar, Founder and Chief Executive Officer of Nykaa, is ranked 10th with a wealth of USD 7.6 billion. She is the only Indian among the top 10.

S12. Ans.(d)
Sol. A journalist from Mumbai, Aarefa Johari was awarded with the Chameli Devi Jain Award for an Outstanding Woman Mediaperson 2021. It was announced by the Media Foundation.

S14. Ans.(d)
Sol. The global theme of IDSDP 2022 is, “Securing a Sustainable and Peaceful Future for All: The Contribution of Sport,” which creates an opportunity for the Day’s celebrations to promote the use of sport as a tool to advance human rights and sustainable development.