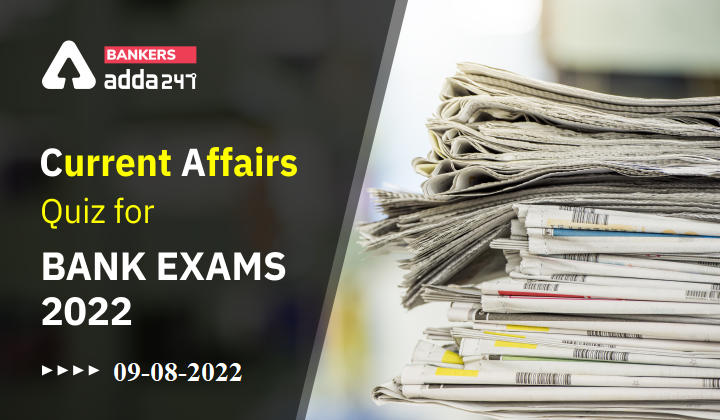 Q3. Who has been elected as the new and 14th Vice-President of India in the election held in August 2022?
(a) Satya Pal Malik
(b) Suvendu Adhikari
(c) Jagdeep Dhankhar
(d) La. Ganesan
(e) Margaret Alva

Q4. Which state has recently inked an MoU with Deloitte India to achieve the target of $1 trillion economy?
(a) Uttar Pradesh
(b) Telangana
(c) Madhya Pradesh
(d) Gujarat
(e) Uttarakhand

Q5. Who among the following has been roped in as the MD & CEO of Unity Small Finance Bank?
(a) Sandeep Ghosh
(b) Subhas Kutte
(c) Renu Basu
(d) Sonam Gupta
(e) Inderjit Camotra

S1. Ans.(d)
Sol. The Securities and Exchange Board of India (SEBI) has constituted a 15-member expert group of Foreign Portfolio Investors (FPIs) to boost overseas flows into the country. The FPI Advisory Committee (FAC) will be chaired by former Chief Economic Adviser KV Subramanian.

S2. Ans.(e)
Sol. In India, the National Handloom Day is observed annually on 7 August to honour the handloom weavers in the country and also highlight the contribution of handloom industry to the socioeconomic development of the country and increase income of the weavers.

S3. Ans.(c)
Sol. Jagdeep Dhankhar has been elected as the 14th Vice-President of India after he won the presidential polls to elect the next Vice-President.

S4. Ans.(a)
Sol. The Uttar Pradesh government led by Chief Minister Yogi Adityanath, has appointed Deloitte India as a consultant for achieving the target of bringing the state’s economy to USD1 trillion mark.

S6. Ans.(c)
Sol. The Athletics Federation of India (AFI) will be celebrating second ‘Javelin Throw Day’ on August 7, 2022. The day was first observed in 2021 in honour of Javelin thrower Neeraj Chopra, who won India’s first Olympic gold medal in athletics at Tokyo.

S8. Ans.(b)
Sol. The Uttar Pradesh government has signed a Memorandum of Understanding with Deloitte India, appointing it as a consultant for achieving the target of lifting the state’s economy to USD 1 trillion.

S14. Ans.(d)
Sol. The 80th anniversary of the August Kranti Din or Quit India Movement, which is considered as one of the important milestones in the history of the freedom struggle of our country, is being observed on 8 August 2022.