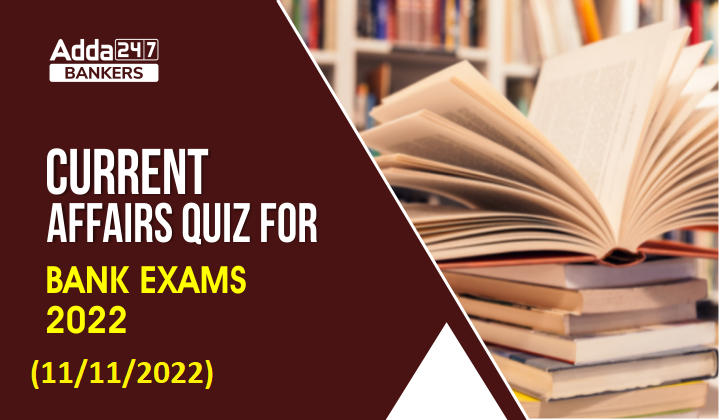 The Current Affairs section constitutes a major part of the General Awareness section in a competitive examination and plays an instrumental role. To supplement your preparation for the General Awareness Section of the upcoming exams like IBPS PO/Clerk Mains, SBI PO Mains and SEBI Grade A Prelims, we are providing you Current Affairs Quiz of 11th November 2022 covering the following topics Headlines: International Kannada Rathna award, World Science Day for Peace and Development, Forbes 2022 Asia’s Power Businesswomen, Mangrove Alliance for Climate.

Q5. What is the theme of World Science Day for Peace and Development 2022?
(a) Future of STI: Impact on Education Skills and Work
(b) Women in Science
(c) Science for a Sustainable Future
(d) Science and Technology for a sustainable future
(e) Basic Sciences for Sustainable Development

Q6. According to the Forbes 2022 Asia’s Power Businesswomen list, honoring 20 outstanding women in business across the Asia-Pacific region. Who among the following was named from India?
(a) Soma Mondal
(b) Vani Kola
(c) Falguni Nayar
(d) Savitri Jindal
(e) Suchi Mukherjee

S4. Ans.(b)
Sol. World Science Day for Peace and Development was proclaimed by the UN Educational, Scientific and UNESCO in 2001 under the UNESCO 31 C/Resolution 20. It is celebrated every year on November 10, around the globe, marking the significance of science in society.

S5. Ans.(e)
Sol. This year’s theme for World Science Day for Peace and Development is “Basic Sciences for Sustainable Development”.

S7. Ans.(e)
Sol. Skyroot Aerospace is set to lift off the country’s first privately developed rocket into space. The Prarambh mission is expected to launch in the second week of November on a demonstration flight with the Vikram-S launch vehicle.

S8. Ans.(b)
Sol. The Sundarbans mangrove forest, one of the largest such forests in the world (140,000 ha), lies on the delta of the Ganges, Brahmaputra and Meghna rivers on the Bay of Bengal. It is adjacent to the border of India’s Sundarbans World Heritage site inscribed in 1987.

S9. Ans.(c)
Sol. A report by Morgan Stanley has forecast that India will surpass Japan and Germany and become the third largest economy by 2027.

S10. Ans.(a)
Sol. Indian Institute of Technology (IIT) Bombay is the best educational education in Southern Asia while IIT Delhi ranks second in the region, according to the QS Asia University Rankings 2023.