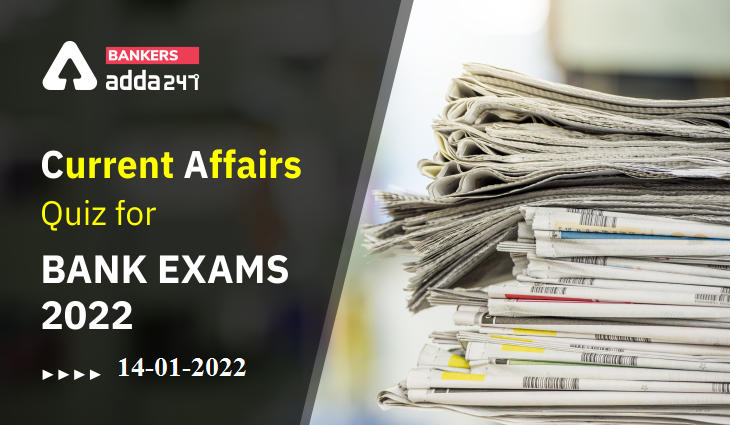 14th December Current Affairs 2022: Here, we are providing the 14th January Current Affairs Quiz. These types of topics are important for candidates who prepare for Bank Exam 2022. In this article, we are covering the following topics Headlines:

The Current Affairs section constitutes a major part of the General Awareness section in a competitive examination and plays an instrumental role. To supplement your preparation for the General Awareness Section of the upcoming exams like IBPS PO/Clerk Mains, SBI PO Mains and SEBI Grade A Prelims, we are providing you Current Affairs Quiz of 14th January 2022 covering the following topics Headlines: Kazakhstan, ISRO chief, RajKummar Rao, Vodafone Idea, Retail inflation, Indu Malhotra.

Q1. Recently, the oldest sloth bear of India passed away aged 40 at Van Vihar National Park and Zoo of Bhopal. What was the name of the bear?
(a) Babli
(b) Gulabo
(c) Pinki
(d) Sheebo
(e) Roshni

Q3. Alikhan Smailov has been appointed as the new Prime Minister of which country?
(a) Georgia
(b) Kazakhstan
(c) Tajikistan
(d) Armenia
(e) Sweden

Q13. Which of the following country has topped the Henley Passport Index 2022?
(a) America
(b) Japan
(c) China
(d) Germany
(e) Iceland

Q14. Who is named as the head of the five-member committee formed by Supreme Court to probe the security breach of PM security in Punjab?
(a) Indu Malhotra
(b) Uday Lalit
(c) Ranjan Gogoi
(d) N. V. Ramana
(e) Roshan Singh

Q15. Who has become the first person in the world to get a heart transplant from a genetically-modified pig?
(a) Amelia Earhart
(b) John Edwards
(c) Bill Cosby
(d) David Bennett
(e) Brett Favre

S3. Ans.(b)
Sol. The parliament of Kazakhstan has unanimously approved the appointment of Alikhan Smailov as the new Prime Minister of the country. Smailov’s name was nominated by Kazakh President Kassym-Jomart Tokayev on January 11, 2022.

S4. Ans.(c)
Sol. Swiss brokerage UBS Securities has lowered the growth forecast of the Indian economy for the current financial year (FY22) to 9.1 per cent due to a massive surge in Omicron infections.

S5. Ans.(d)
Sol. MPATGM will be manufactured by Bharat Dynamics Limited at its facility in Bhanoor, Telangana.

S6. Ans.(b)
Sol. India has improved its position by seven places to rank at 83rd place among 111 countries in the latest Henley Passport Index, released for Q1 of 2022.

S7. Ans.(d)
Sol. The Board of Control for Cricket in India (BCCI) has informed that Tata group has replaced Chinese mobile phone manufacturer Vivo as the title sponsor of the Indian Premier League (IPL) for 2022 and 2023 seasons. The multinational conglomerate will pay Rs. 300 crore per year as the title sponsor of IPL for the next two seasons.

S10. Ans.(d)
Sol. The Net Present Value (NPV) of this interest is expected to be about ?16,000 crore. The Indian government will hold about 35.8% of the total outstanding shares of the company, and the promoter shareholders Vodafone Group would hold around 28.5% and Aditya Birla Group around 17.8%.

S13. Ans.(b)
Sol. Japan and Singapore have been ranked 1st, with passport holders have accessibility of 192 destinations visa-free.

S14. Ans.(a)
Sol. The Supreme Court has constituted a five-member committee to probe the security breach during the recent visit of Prime Minister Narendra Modi to Punjab. The committee will be headed by former apex court judge Justice Indu Malhotra.

S15. Ans.(d)
Sol. A US man has become the first person in the world to get a heart transplant from a genetically-modified pig. David Bennett, 57, is doing well three days after the experimental seven-hour procedure in Baltimore.