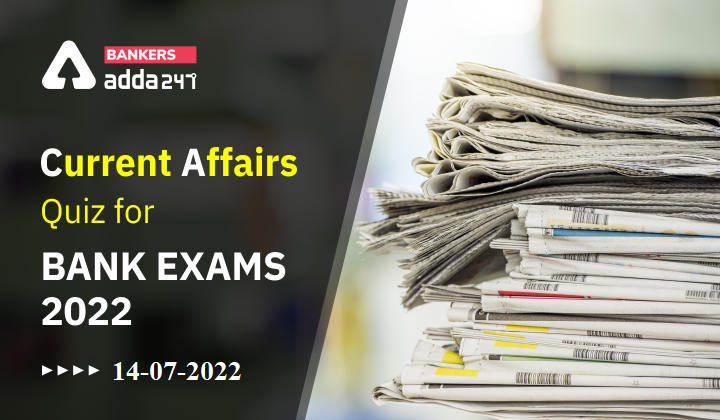 The Current Affairs section constitutes a major part of the General Awareness section in a competitive examination and plays an instrumental role. To supplement your preparation for the General Awareness Section of the upcoming exams like IBPS PO/Clerk Mains, SBI PO Mains and SEBI Grade A Prelims, we are providing you Current Affairs Quiz of 14th July 2022 covering the following topics Headlines: ICC Men’s Player of the Month, World Paper Bag Day, James Webb Telescope image, Eureka Forbes, SAH-BHAGITA scheme.

Q1. Who has been voted as the ICC Men’s Player of the Month for June 2022
(a) Jonny Bairstow
(b) Joe Root
(c) Daryl Mitchell
(d) Rohit Sharma
(e) Jos Buttler

Q3. What is the theme of World Paper Bag Day 2022?
(a) Only One Earth
(b) It’s never too late to switch from plastic to paper
(c) If You’re ‘fantastic’, Do Something ‘dramatic’ To Cut The ‘Plastic’, Use ‘Paper Bags’
(d) Living Sustainably in Harmony with Nature
(e) Ecosystem Restoration

Q5. The first James Webb Telescope image revealed which of the following?
(a) Image of Earth
(b) Asteroids
(c) Earliest Galaxies
(d) Image of Moon
(e) Image of Sun

Q6. Who among the following has been selected for the post of Chairman & Managing Director, RailTel Corporation of India Ltd in July 2022?
(a) Gurdeep Singh
(b) Debasish Nanda
(c) Rajendra Prasad
(d) Sanjai Kumar
(e) Subhash Kumar

Q8. Who among the following is set to join as Managing Director & CEO of Eureka Forbes in July 2022?
(a) George Kurian
(b) Dinesh Paliwal
(c) Niraj Shah
(d) Ashok Vemuri
(e) Pratik Pota

Q11. A subsidary of which of the following banks has signed an MoU with Minisrtry of External Affairs for Trilateral Development Cooperation Fund in July 2022?
(a) Indian Bank
(b) Bank of Baroda
(c) SBI
(d) Indian Overseas Bank
(e) Punjab National Bank

S1. Ans.(a)
Sol. England batter Jonny Bairstow has been voted as the ICC Men’s Player of the Month for June 2022.

S2. Ans.(b)
Sol. Every year, World Paper Bag Day is observed on July 12 to raise awareness of the importance of using paper bags instead of plastic bags.

S4. Ans.(a)
Sol. Nitin Gadkari, the Union Minister for Road Transport and Highways has said that the Dwarka Expressway, which will be India’s first elevated urban expressway, will be operational by 2023.

S7. Ans.(b)
Sol. AAI’s Leh airport is being built as a carbon-neutral airport, a first in India. A “Geothermal system” in hybridization with Solar PV Plant will be provided in the New airport Terminal Building for heating and cooling purposes.

S9. Ans.(b)
Sol. Monty Norman, a British composer who wrote the theme tune for the James Bond films, has died. He was 94. Norman was hired by producer Albert “Cubby” Broccoli to compose a theme for the first James Bond film, “Dr. No,” released in 1962.

S10. Ans.(d)
Sol. Lt Governor of Delhi V K Saxena launched an incentive scheme for resident welfare associations to ensure property tax compliance and waste management in the city. Under the SAH-BHAGITA scheme, RWAs (Resident Welfare Associations) will get 15 per cent of the total collection of property tax for development works in their areas.

S11. Ans.(c)
Sol. SBICAP Ventures Limited (SVL), a subsidiary of the State Bank of India signed a MoU with the Ministry of External Affairs for establishing the Trilateral Development Cooperation Fund (TDC Fund) for joint projects with global partners.

S12. Ans.(b)
Sol. The government of Japan has conferred the ‘Order of the Rising Sun, Gold and Silver Star’ award on Sanmar Group Vice Chairman Narayanan Kumar in recognition of his contribution toward strengthening economic relations between Japan and India.

S14. Ans.(e)
Sol. Retail inflation, based on the consumer price index (CPI), eased to 7.01 per cent in June this year compared to 7.04 per cent in the preceding month.

S15. Ans.(a)
Sol. Marizanne Kapp of South Africa has been voted ICC women’s Player of the Month for June 2022.