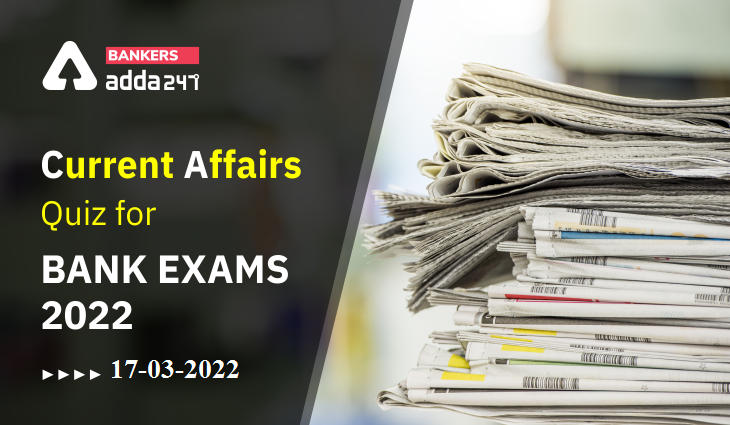 The Current Affairs section constitutes a major part of the General Awareness section in a competitive examination and plays an instrumental role. To supplement your preparation for the General Awareness Section of the upcoming exams like IBPS PO/Clerk Mains, SBI PO Mains and SEBI Grade A Prelims, we are providing you Current Affairs Quiz of 17th March 2022 covering the following topics Headlines: Writing with Fire, My EV’ portal, National Vaccination Day, Monsoon, Modi@20: Dreams Meet Delivery, Paytm Payments Bank.

Q3. Amelia Kerr has won the ICC ‘Women’s Player of the Month’ award for February 2022. She plays for which country?
(a) New Zealand
(b) Zimbabwe
(c) Australia
(d) West Indies
(e) England

Q4. Which state/UT government has launched an online ‘My EV‘ (My Electric Vehicle) portal for the purchase and registration of electric autos?
(a) Jammu and Kashmir
(b) Puducherry
(c) Lakshadweep
(d) Delhi
(e) Ladakh

Q6. Who has been appointed as new brand ambassador for My11Circle by Games24x7?
(a) Shubman Gill
(b) Ruturaj Gaikwad
(c) Hrithik Roshan
(d) Sourav Ganguly
(e) Both a & b

Q8. The United States and its allies recently announced to take away “most favoured nation” status from which country?
(a) China
(b) Iran
(c) Turkey
(d) Russia
(e) Cuba

Q12. Which of the following Indian documentaries has been selected in the last five for the best documentary feature category at the Oscars?
(a) Writing with Fire
(b) Summer of Soul
(c) Social Dilemma
(d) Great Indian Murder
(e) Kashmir Files

Q15. Kumudben Joshi who has passed away was the former Governor of which state?
(a) Maharashtra
(b) Bihar
(c) Andhra Pradesh
(d) Madhya Pradesh
(e) Gujarat

S2. Ans.(c)
Sol. In India, the National Vaccination Day (also known as National Immunisation Day (IMD)) is observed on 16 March ever year, to convey the importance of vaccination to the entire nation.

S4. Ans.(d)
Sol. The Delhi government launched an online ‘My EV‘ (My Electric Vehicle) portal for the purchase and registration of electric autos in Delhi. It is accessible to all users on the website of the transport department of Delhi.

S5. Ans.(e)
Sol. First Digital Water Bank of India ‘AQVERIUM’ has been launched in Bengaluru, which is an innovative initiative aimed at better water management. It is formed by AquaKraft Group Ventures.

S11. Ans.(b)
Sol. Kerala has yet again emerged on top when it comes to maternal and child health, with the State recording the lowest Maternal Mortality Ratio (MMR) of 30 (per one lakh live births) in the country.

S12. Ans.(a)
Sol. A documentary about the Dalit-led, all-woman newspaper Khabar Lahariya, “Writing With Fire” became the first Indian documentary to be nominated at the Oscars.

S13. Ans.(e)
Sol. The theme for National Vaccination Day or National Immunisation Day 2022 is “Vaccines Work for all”.

S14. Ans.(d)
Sol. The two-time WWE Hall of Famer, Scott Hall has passed away, due to heart attack. He was 63. His tenure with World Wrestling Federation (WWF, now WWE) began in May 1992.

S15. Ans.(c)
Sol. Kumudben Manishankar Joshi, the former Governor of Andhra Pradesh has passed away. She was 88.