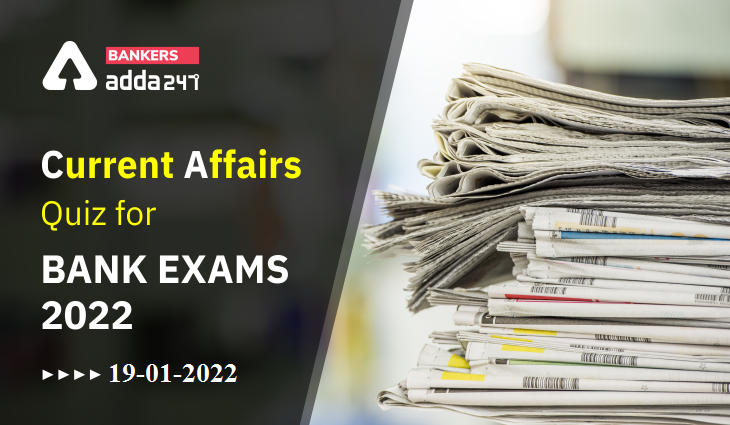 19th December Current Affairs 2022: Here, we are providing the 19th January Current Affairs Quiz. These types of topics are important for candidates who prepare for Bank Exam 2022. In this article, we are covering the following topics Headlines:

Q2. What is the theme of the digital WEF’s Davos Agenda 2022 Summit?
(a) Redefining capitalism
(b) The Great Reset
(c) The State of the World
(d) Working Together, Restoring Trust
(e) Restoring the World

Q4. Padma Shri awardee Shanti Devi who has passed away at the age of 88 was a social activist from which state?
(a) Bihar
(b) Assam
(c) West Bengal
(d) Maharashtra
(e) Odisha

Q10. Toshiki Kaifu passed away recently. He was the former Prime Minister of which country?
(a) South Korea
(b) Japan
(c) Vietnam
(d) Malaysia
(e) Indonesia

Q11. Under SpaceX’s Transporter-3 Mission, which of the following African nation has launched its first ‘made In Africa’ Satellites?
(a) Ghana
(b) Ethiopia
(c) Morocco
(d) South Africa
(e) Algeria

S1. Ans.(a)
Sol. A total of 46 Startups have been recognized as winners of National Startup Awards 2021 along with 1 incubator and 1 accelerator, by the Government of India on January 16, 2022.

S2. Ans.(c)
Sol. India’s Prime Minister Shri Narendra Modi will address the World Economic Forum’s (WEF’s) Davos Agenda Summit 2022, through video-conferencing on January 17, 2022.The “Davos Agenda 2022” summit is being held digitally from January 17 to January 21, 2022, due to the Covid-19 pandemic..The theme of the event is “The State of the World.”

S4. Ans.(e)
Sol. Odisha-based social worker and Padma Shri awardee Shanti Devi, who was remembered as the voice of the poor, has passed away. She was 88.

S6. Ans.(c)
Sol. The former President of Mali, Ibrahim Boubacar Keita, who was ousted in a military coup, has passed away. He was 76.

S13. Ans.(a)
Sol. The US Treasury has minted coins featuring poet Maya Angelou – the first black woman ever featured on the US 25-cent coin known as a quarter.

S15. Ans.(e)
Sol. Narendra Kumar Goenka has been appointed as the new chairman of the Apparel Export Promotion Council, AEPC.