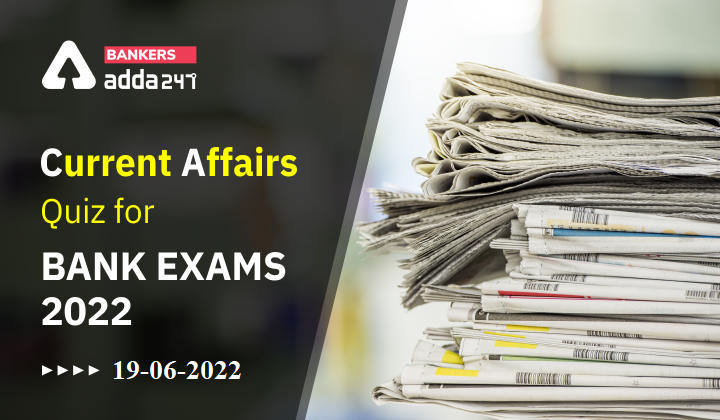 The Current Affairs section constitutes a major part of the General Awareness section in a competitive examination and plays an instrumental role. To supplement your preparation for the General Awareness Section of the upcoming exams like IBPS PO/Clerk Mains, SBI PO Mains and SEBI Grade A Prelims, we are providing you Current Affairs Quiz of 19th June 2022 covering the following topics Headlines: NATO Summit, GST Council, Press Council of India, International Day for Countering Hate Speech, Sustainable Gastronomy Day.

Q1. Japan has participated in NATO Summit in Madrid for the first time in June 2022. Who is the present Secretary General of NATO?
(a) Robert Abela
(b) Ian Fry
(c) Gilbert Houngbo
(d) Jens Stoltenberg
(e) Katalin Novak

Q5. Hamza Abdi Barre has been appointed as the prime minister of which country?
(a) Kenya
(b) Sudan
(c) Somalia
(d) Zimbabwe
(e) Ethiopia

S1. Ans.(d)
Sol. Jens Stoltenberg is a Norwegian politician serving since 2014 as the 13th secretary general of NATO.

S2. Ans.(e)
Sol. The 47th meeting of the GST Council will be held on June 28 and 29, 2022 in Srinagar. The GST Council is chaired by Finance Minister Nirmala Sitharaman.

S3. Ans.(b)
Sol. The Reserve Bank of India raised the Additional Factor of Authentication (AFA) limit from Rs 5,000 to Rs 15,000 per transaction for e-mandates on cards, Prepaid Payment Instruments (PPIs) and UPI for recurring transactions.

S6. Ans.(e)
Sol. Zomato has collaborated with the Jio-bp to support Zomato’s commitment towards “The Climate Group’s EV100 initiative of 100% EV fleet by 2030”.

S8. Ans.(b)
Sol. The world’s largest living plant has been identified in the shallow waters off the coast of Western Australia.

S10. Ans.(c)
Sol. Every year, the world observes Sustainable Gastronomy Day on 18 June. The objective of this day is to recognise the practices associated with sustainable food consumption, especially with the art of collecting and preparing the food we eat.