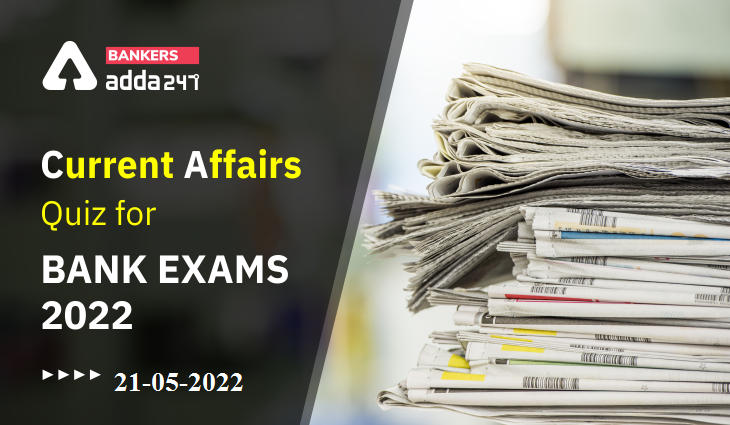 The Current Affairs section constitutes a major part of the General Awareness section in a competitive examination and plays an instrumental role. To supplement your preparation for the General Awareness Section of the upcoming exams like IBPS PO/Clerk Mains, SBI PO Mains and SEBI Grade A Prelims, we are providing you Current Affairs Quiz of 21st May 2022 covering the following topics Headlines: Lok Milni, SRESTHA-G, Patanjali Ayurveds, World Bee Day, National Endangered Species Day.

Q10. What is the theme of World Bee Day 2022?
(a) Bee Engaged: Celebrating the diversity of bees and beekeeping systems
(b) Bee Engaged – Build Back Better for Bees
(c) Save the Bees
(d) Preserving agricultural heritage around the world
(e) Protecting Bees

Q12. What is the theme of National Endangered Species Day theme 2022?
(a) Wildlife Without Borders
(b) Life below water for people and planet
(c) Sustaining all life on Earth
(d) Recovering key species for ecosystem restoration
(e) Protect plant and animal species from extinction

S1. Ans.(d)
Sol. Chief Minister of Punjab Bhagwant Mann heard the grievances of the people of the state and issued redressal directions in ‘Lok Milni’, a first-of-its-kind public interaction programme that was launched.

S5. Ans.(b)
Sol. According to the Reserve Bank of India (RBI), the public sector banks have reported over a 51% dip in the amount involved in frauds to Rs 40,295.25 crore during the financial year ended March 2022.

S10. Ans.(a)
Sol. This year Food and Agriculture Organization (FAO) will celebrate World Bee Day through a virtual event, under the theme ‘Bee Engaged: Celebrating the diversity of bees and beekeeping systems’.

S11. Ans.(b)
Sol. Every year on the third Friday of May, people across the globe observe National Endangered Species Day. This year the day is celebrated on May 20.

S14. Ans.(e)
Sol. The Board of Directors of InterGlobe Aviation Limited appointed Pieter Elbers as Chief Executive Officer. He will join IndiGo on or before 1 Oct 2022.