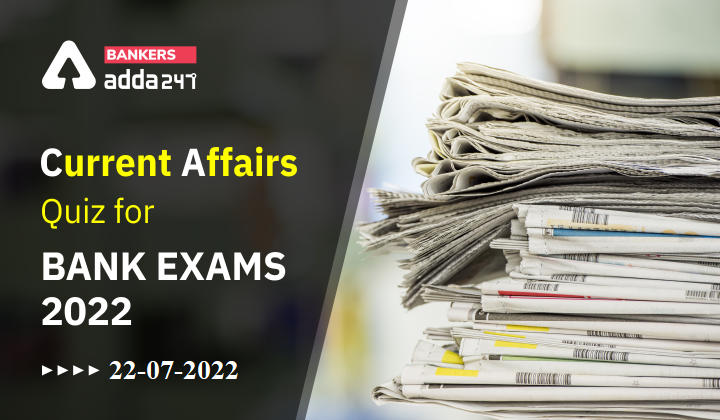 The Current Affairs section constitutes a major part of the General Awareness section in a competitive examination and plays an instrumental role. To supplement your preparation for the General Awareness Section of the upcoming exams like IBPS PO/Clerk Mains, SBI PO Mains and SEBI Grade A Prelims, we are providing you Current Affairs Quiz of 23rd July 2022 covering the following topics Headlines: 13th Petersberg Climate Dialogue, Forbes Billionaires List 2022, Pay as you Drive, Morgan Stanley, Insolvency and Bankruptcy Board of India.

Q1. Which port has become the first 100 per cent Landlord, Major Port of India, having all berths being operated on the PPP model?
(a) Kandla Port
(b) Vizag Port
(c) Ennore Port
(d) Visakhapatnam Port
(e) Jawaharlal Nehru Port

Q8. Which of the following state ranked first in the utilisation of funds under the government’s flagship Smart City Mission?
(a) Tamil Nadu
(b) Karnataka
(c) Uttar Pradesh
(d) Maharashtra
(e) Andhra Pradesh

Q9. Who has been appointed as a Whole-time Member of the Insolvency and Bankruptcy Board of India (IBBI) for five years?
(a) Roshi Dixit
(b) Jayanti Prasad
(c) Priyanka Agrawal
(d) Aanchal Gupta
(e) Preeti Tiwari

Q10. Who has been elected as the 9th President of the Island nation by the Sri Lankan Parliament?
(a) Ranil Wickremesinghe
(b) Maithripala Sirisena
(c) Mahinda Rajapaksa
(d) Chandrika Kumaratunga
(e) Dingiri Banda Wijetunga

Q14. Who among the following has been elected the 15th president of India?
(a) Draupadi Murmu
(b) Yashwant Sinha
(c) Jagdeep Dhankar
(d) Margaret Alva
(e) Mukhtar Abbas Naqvi

S3. Ans.(d)
Sol. Elon Musk is the richest person with $230 billion net worth, followed Bernard Arnault of Louis Vuitton at the second spot and Amazon’s Jeff Bezos at third on the list.

S7. Ans.(e)
Sol. RattanIndia Power has appointed Brijesh Gupta as managing director. He has over three decades of experience in the industrial sector, and has worked across the renewable, steel, mining and commodities sector in India and abroad.

S8. Ans.(a)
Sol. Tamil Nadu tops the list of states so far as utilisation of funds under the government’s flagship Smart City Mission is concerned.

S9. Ans.(b)
Sol. The Central Government has appointed, Jayanti Prasad as a Whole-time Member of the Insolvency and Bankruptcy Board of India (IBBI) for five years.

S10. Ans.(a)
Sol. Veteran Sri Lankan politician and six-time Prime Minister, Ranil Wickremesinghe has been elected as the 9th President of the Island nation by the Parliament.

S11. Ans.(c)
Sol. India is ranked 87th on the list of the world’s most powerful passports in 2022, according to the latest Henley Passport Index from Henley & Partners, an immigration consultancy.