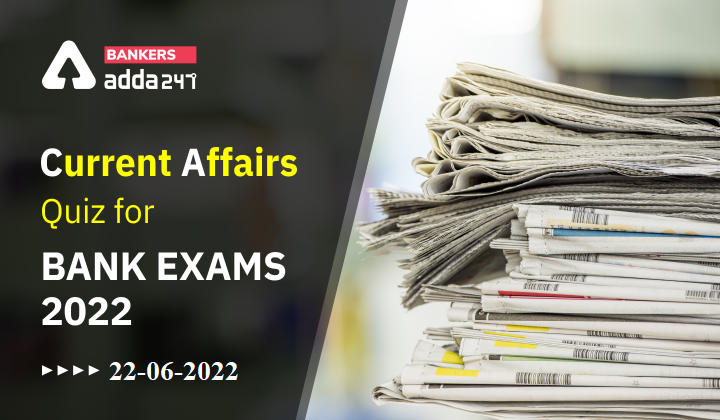 The Current Affairs section constitutes a major part of the General Awareness section in a competitive examination and plays an instrumental role. To supplement your preparation for the General Awareness Section of the upcoming exams like IBPS PO/Clerk Mains, SBI PO Mains and SEBI Grade A Prelims, we are providing you Current Affairs Quiz of 22nd June 2022 covering the following topics Headlines: International Day of Yoga, Women’s Prize for Fiction, Canadian Grand Prix 2022, Bharatiya Reserve Bank Note Mudran Ltd.

Q2. What is the theme of International Yoga Day 2022?
(a) Yoga at Home and Yoga with Family
(b) Yoga for Humanity
(c) Yoga for Harmony and Peace
(d) Yoga for Peace
(e) Yoga for Health

Q6. Who has won the Women’s Prize for Fiction this year for her novel ‘The Book of Form and Emptiness’?
(a) Lisa Allen-Agostini
(b) Louise Erdrich
(c) Meg Mason
(d) Maggie Shipstead
(e) Ruth Ozeki

Q7. Which ministry has declared the IT resources of ICICI Bank, HDFC Bank and UPI managing entity NPCI as ‘critical information infrastructure’?
(a) Ministry of Micro, Small and Medium Enterprises
(b) Ministry of Skill Development and Entrepreneurship
(c) Ministry of Electronics and Information Technology
(d) Ministry of Social Justice and Empowerment
(e) Ministry of Communications

Q12. The Reserve Bank of India (RBI) has cancelled the license of Millath Co-operative Bank Ltd based out of _______.
(a) Kerala
(b) Uttar Pradesh
(c) Karnataka
(d) Bihar
(e) Maharashtra

S2. Ans.(b)
Sol. International Yoga Day 2022 will be celebrated on 21 June 2022 with the theme ‘Yoga for Humanity’ across the world with great enthusiasm.

S3. Ans.(b)
Sol. International Day of the Celebration of the Solstice is observed globally on 21st June. This day bring awareness about solstices and equinoxes and their significance for several religions and ethnic cultures.

S4. Ans.(a)
Sol. Recently, UNESCO recognized the use of information and communication technology (ICT), under a comprehensive initiative called PM eVIDYA by the department of school education, Ministry of Education.

S6. Ans.(e)
Sol. Renowned US-Canadian author, film-maker, and Zen Buddhist priest Ruth Ozeki has won the Women’s Prize for Fiction this year for her novel ‘The Book of Form and Emptiness’.

S7. Ans.(c)
Sol. The Ministry of Electronics and IT (MeitY) has declared the IT resources of ICICI Bank, HDFC Bank and UPI managing entity NPCI as ‘critical information infrastructure’, implying any harm to them can have an impact on national security and any unauthorised person accessing these resources may be jailed for up to 10 years.

S8. Ans.(b)
Sol. The book written by journalist-author RN Bhaskar, claims to bring to light, for the first time, the unknown aspects of one of the richest men in the world.