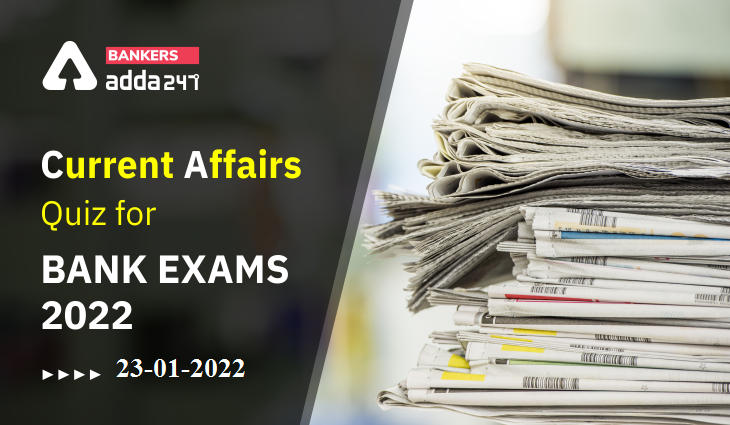 23rd December Current Affairs 2022: Here, we are providing the 23rd January Current Affairs Quiz. These types of topics are important for candidates who prepare for Bank Exam 2022. In this article, we are covering the following topics Headlines:

Q4. Prime Minister Narendra Modi will inaugurate a 216-foot statue of Ramanujacharya in a sitting position in Hyderabad. The statue will be called as the _______.
(a) Statue of Equality
(b) Statue of Unity
(c) Statue of Quality
(d) Statue of Peace
(e) Statue of Dignity

Q7. Which of the following states/UTs has declared Jerri hamlet as its first ‘Milk Village’?
(a) Jammu and Kashmir
(b) Ladakh
(c) Haryana
(d) Punjab
(e) Bihar

Q8. The new species of rain frog that was found in the Panama forest has been named after _____.
(a) Sunita Narain
(b) Donald Trump
(c) Narendra Modi
(d) Greta Thunberg
(e) Sunderlal Bahuguna

Q9. Recently, which of the following nation has decided to move its capital to Nusantara?
(a) Srilanka
(b) Thailand
(c) Myanmar
(d) Malaysia
(e) Indonesia

S1. Ans.(d)
Sol. The Foreign Direct Investment (FDI) flows to India fell by 26 percent in 2021, compared to 2020, as per the UN Conference on Trade and Development (UNCTAD) Investment Trends Monitor published.

S3. Ans.(b)
Sol. Brahma Kumaris is organising the event on the occasion of the 53rd Ascension Anniversary of Pitashree Prajapita Brahma, Founding Father of Brahma Kumaris.

S4. Ans.(a)
Sol. Prime Minister Narendra Modi will inaugurate a 216-foot statue of Ramanujacharya in a sitting position in Hyderabad on February 5, 2022, to celebrate the 1,000th birth anniversary of the saint. The statue will be called as the ‘Statue of Equality’.

S6. Ans.(b)
Sol. Kokborok Day, also known as the Tripuri Language Day is annually celebrated across the Indian State of Tripura on 19th January with an aim to develop the Kokborok Language.

S7. Ans.(a)
Sol. In the Union Territory of Jammu and Kashmir, the administration has declared Jerri settlement in Reasi district as the first ‘Milk Village’ of the J&K and sanctioned 57 more dairy farms under the Integrated Dairy Development Scheme (IDDS) for the hamlet.

S9. Ans.(e)
Sol. Indonesia will move its capital to mineral-rich East Kalimantan, an Indonesian province on the island of Borneo. The name of the new capital will be Nusantara — which means “archipelago” in Javanese.

S10. Ans.(d)
Sol. The National War Memorial was inaugurated by Prime Minister Narendra Modi on February 25, 2019. The eternal torch of this memorial burns at the heart of the Smarak Stambh, the main pillar of the memorial, inside the Amar Chakra.