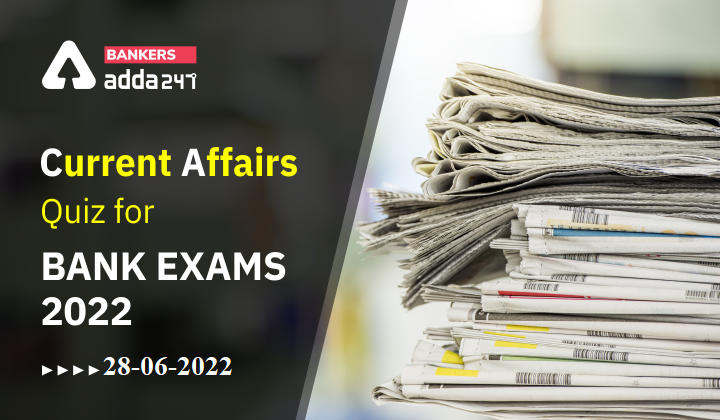 The Current Affairs section constitutes a major part of the General Awareness section in a competitive examination and plays an instrumental role. To supplement your preparation for the General Awareness Section of the upcoming exams like IBPS PO/Clerk Mains, SBI PO Mains and SEBI Grade A Prelims, we are providing you Current Affairs Quiz of 28th June 2022 covering the following topics Headlines: Yagon-35, Garuda Aerospace, Campus Power, Research and Analysis Wing, Indian Olympic Association.

S9. Ans.(d)
Sol. Mo Bus, Odisha based public transport service has been honoured with a prestigious United Nations award, for their role and efforts in helping the world recover better from Covid19.

S10. Ans.(e)
Sol. International Day against Drug Abuse and Illicit Trafficking, also known as World Drug Day, is conducted by the United Nations. It is observed on June 26 annually.

S11. Ans.(c)
Sol. A large number of people participated in the boat parade in Siolim village of Goa’s Bardez taluka, marking the beginnng of revelry in the ‘Sao Joao’ festival.

S13. Ans.(e)
Sol. The United Nations General Assembly on December 12, 1997, adopted a resolution to proclaim June 26 as the International Day in Support of Victims of Torture.

S15. Ans.(d)
Sol. Recognising the potential of the MSME and their role in strengthening economies, June 27 is celebrated as the Micro-Small and Medium-sized Enterprises Day.