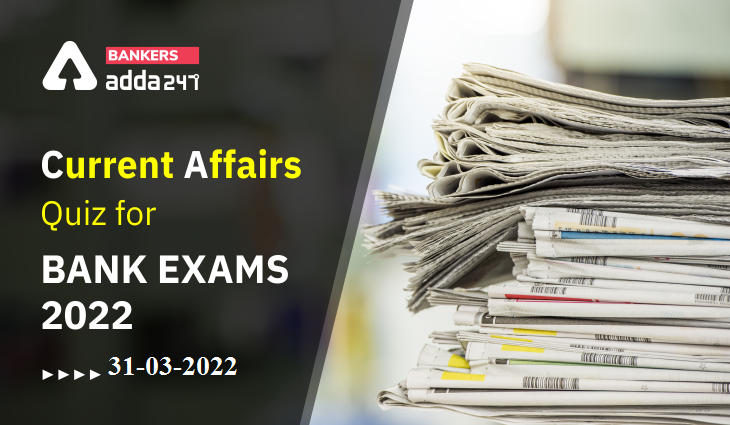 The Current Affairs section constitutes a major part of the General Awareness section in a competitive examination and plays an instrumental role. To supplement your preparation for the General Awareness Section of the upcoming exams like IBPS PO/Clerk Mains, SBI PO Mains and SEBI Grade A Prelims, we are providing you Current Affairs Quiz of 31st March 2022 covering the following topics Headlines: Agriculture towards 2030, HURUN Global U40 Self-Made Billionaires, Fleet Card-Fuel on Move, Qatar 2022 football World Cup.

Q6. Who has been re-elected as the President of Badminton Association of India (BAI) for four years from 2022-2026?
(a) Jyotiraditya Scindia
(b) Kiren Rijiju
(c) Himanta Biswa
(d) Tarun Gogoi
(e) Prakash Padukone

Q11. Which of the following transport behemoth has announced the appointment of Indian-born Raj Subramaniam as its head?
(a) Uber
(b) FedEx
(c) DHL
(d) United Parcel Service
(e) XPO Logistics

Q12. Which of the following has unveiled a new initiative with the Indian Oil Corporation Ltd under which its convoys will be to refuel at fuel stations of the state-run energy major?
(a) Indian Air Force
(b) Indian Navy Force
(c) Indian Army Force
(d) Indian Coast Guard
(e) National Security Guard

Q14. Who has been featured as the world’s richest self-made billionaire aged 40 and under as per Hurun report for 2022?
(a) Zhang Yiming
(b) Dustin Moskovitz
(c) Brian Chesky
(d) Sam Bankman-Fried
(e) Mark Zuckerberg

S2. Ans.(c)
Sol. The Museum will showcase the life, times and contribution of all 14 Prime Ministers of India so far, except for the collections and works on Jawaharlal Nehru, who has a separate Nehru Memorial Museum, which was also his residence.

S3. Ans.(d)
Sol. Uday Kotak has announced to step down as the Chairman of the board of the Infrastructure Leasing & Financial Services (IL&FS), after his term ends on April 2, 2022.

S4. Ans.(e)
Sol. The Hurun Report 2022 lists 87 Self-Made Billionaires in the world aged 40 and under, which is up by 8 from last year.The USA leads the list with 37 self-made billionaires.China is second with 25 billionaires, followed by United Kingdom (8), India (6) and Sweden (3) respectively in top five.

S5. Ans.(a)
Sol. The Union Minister of Commerce and Industry, Piyush Goyal inaugurated theIndian Jewellery Exposition Centre (IJEX) building in Dubai, UAE on March 29, 2022, during his visit to Dubai to participate in the India Pavilion at Dubai Expo 2020.

S6. Ans.(c)
Sol. The incumbent president of Badminton Association of India (BAI), Himanta Biswa Sarma has been re-elected unopposed for a second four years term, from 2022 to 2026.

S10. Ans.(b)
Sol. Dr Renu Singh has been appointed by MoEF as the next director of Forest Research Institute (FRI) in Dehradun. She will be the institute’s second woman director.

S12. Ans.(a)
Sol. The Indian Air Force unveiled a new initiative with the Indian Oil Corporation Ltd under which its convoys will be to refuel at fuel stations of the state-run energy major.

S14. Ans.(e)
Sol. Meta CEO Mark Zuckerberg is the world’s richest self-made billionaire aged 40 and under with a total wealth of $76 billion.

S15. Ans.(d)
Sol. Canada has qualified for the Qatar 2022 football World Cup for the first time in 36 years, after thoroughly beating Jamaica 4-0 in Toronto.