i. In Uttar Pradesh, Chief Minister Yogi Adityanath launched Scheme for Adolescent girls (SAG). The scheme focuses on girls aged between 11 to 14 years who have left studies and will take steps for proper nutrition and special care for them.
ii. The state government also decided to observe Adolescent girls day on 8th of every month at Anganwadi centres across the state.
2. First Mega Food Park Of Tripura Inaugurated  In Agartala

i. Sudanese President Omar al-Bashir has declared a year-long state of emergency, dissolving his cabinet and local governments throughout the country.
ii. Omar al-Bashir in a televised address called on Sudan’s parliament to postpone constitutional amendments that would allow him to run for another term in a presidential election in 2020.
Awards

i. 33-year-old Ashoka University teacher and Wipro Sustainable Fellow, Divya Karnad became the First Indian Woman to be honoured with the ‘Future for Nature Award’ for her work on marine conservation.
ii. The award is given to 3 people annually, and this year it was given to Oliver Nsengimana and Fernanda Abra along with Divya Karnad. It is a prestigious international award that celebrates achievements in protecting wild animals and plant species.

i. The Digital India Awards have been instituted under the ambit of the National Portal of India by National Informatics Centre, MeitY, to promote exemplary initiatives in e-governance using the medium of World Wide Web.

Find The Complete List Of Winners Here
Schemes and Committees
6. Odisha To Give Free Sanitary Napkins To 17 Lakh School Girls

i. The Odisha Cabinet approved the ‘Khushi‘ scheme to provide free sanitary napkins to school girls across the state. The scheme will benefit nearly 17.25 lakh school girls from Class VI to XII studying in government and government-aided schools.
ii. The state government will spend INR 466 crore over a period of 5 years to implement the scheme.

7. CBDT Set Up Panel To Help Bring Down Tax Litigation

i. The Central Board of Direct Taxes (CBDT) formed a 4-member committee, headed by income tax commissioner Sanjeev Sharma, to look into the matter of taxation related pain points and submit its final report and recommendations by mid-March.
ii. It will tackle the issue by addressing some current pain points and recommending some steps borrowed from international best practices. 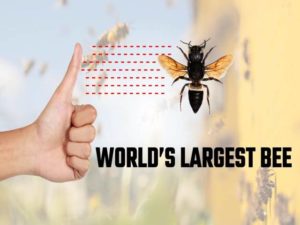 i. Wallace’s giant bee (Wallace Bee),  the largest bee known on the Earth which was considered to be extinct since 1981 was re-spotted in an Indonesian forest.
ii. Scientists spotted a female bee of the species Megachile pluto and its size is four times the size of the typical European honeybee and has a wingspan of 2.5 inches.