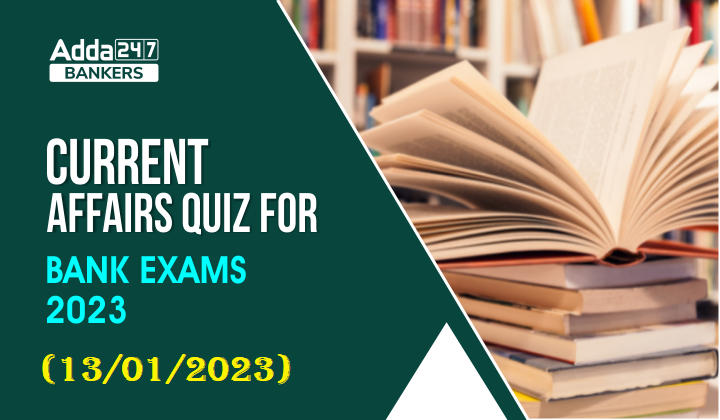 The Current Affairs section constitutes a major part of the General Awareness section in a competitive examination and plays an instrumental role. To supplement your preparation for the General Awareness Section of the upcoming exams like IBPS PO/Clerk Mains, SBI PO Mains and SEBI Grade A Prelims, we are providing you Current Affairs Quiz of 13th January 2023 covering the following topics Headlines: Jadunama, National Youth Day, National Youth Festival 2023, World Bank, Swachhata Pakhwada.

Q2. The book, “Jadunama” authored by Arvind Mandloi was launched in January 2023, the book is written on who among the following?
(a) Javed Akhtar
(b) Shah Rukh Khan
(c) Amitabh Bachan
(d) Dilip Kumar
(e) Juhi Chaturvedi

Q3. Hugo Lloris announced his retirement from International football in January 2023, he played for which of the following national team?
(a) Argentina
(b) Brazil
(c) France
(d) Germany
(e) Belgium

Q4. Which of the following state governments has passed a bill to provide women of the state the legal right of 30% reservation in public services and posts?
(a) Tamil Nadu
(b) Kerala
(c) Uttarakhand
(d) Rajasthan
(e) Gujarat

Q7. What is the theme of National Youth Festival 2023?
(a) Intergenerational Solidarity: Creating a World for All Ages
(b) Yuvaah – Utsah Naye Bharat Ka
(c) Developed Youth – Developed India
(d) FIT YOUTH FIT INDIA
(e) Be the Voice of New India and Find solutions and Contribute to Policy

Q10. Which of the following country is all set to be taught Punjabi in public schools?
(a) Canada
(b) Germany
(c) United Kingdom
(d) Australia
(e) China

Q13. Name the former and last King of Greece who ruled Greece before the country became a republic in 1974 passed away.
(a) Aeropos II
(b) Alexander II
(c) Amyntas II
(d) Constantine II
(e) Perdiccas III

S3. Ans.(c)
Sol. France’s World Cup-winning captain Hugo Lloris announced his retirement from international football at the age of 36. The Tottenham goalkeeper made a record 145 appearances for France and captained Les Bleus as they won the 2018 World Cup in Russia.

S4. Ans.(c)
Sol. Governor of Uttarakhand Lt. Gen (retd) Gurmit Singh gave the nod to a Bill that gives 30% reservation to the native women of the State.

S6. Ans.(b)
Sol. National Youth Day is celebrated every year on January 12 to mark the birth anniversary of Swami Vivekananda.

S7. Ans.(c)
Sol. The Centre said the festival is held to provide exposure to youths at a national level and this year’s theme for the four-day programme is “Viksit Yuva – Viksit Bharat (Developed Youth – Developed India)”.

S8. Ans.(b)
Sol. Ministry of Road Transport & Highways, Government of India is observing the Road Safety Week from 11th to 17th January 2023, under “Swachhata Pakhwada”, to propagate the cause of safer roads for all.

S9. Ans.(a)
Sol. This year the festival is being organized by the Union Ministry of Youth Affairs & Sports in collaboration with the Karnataka. The event will be held from January 12 to January 16, 2023, at Hubballi- Dharwad, Karnataka.

S12. Ans.(c)
Sol. Hockey India has launched a new metaverse product to tie in with its hosting of the Men’s World Cup in Bhubaneswar and Rourkela from January 13-29. ‘Hockeyverse’, which Hockey India claims marks a first for a national sports federation, has been launched across the governing body’s social media platforms and is designed to enhance the tournament experience for fans around the world.

S13. Ans.(d)
Sol. Constantine II, the former and last King of Greece who ruled Greece before the country became a republic in 1974 passed away in Athens, Greece, at 82. He was born of King Paul I, younger brother to King George II, of Greece and German aristocrat Princess Frederica of Hannover, Germany, on 2nd June 1940 in Psikhikó near Athens, Greece.

S14. Ans.(a)
Sol. India’s growth is expected to slow to 6.9 per cent in Financial Year 2023, a 0.6 percentage point decrease since June, as the global economy and rising uncertainty weigh on export and investment growth, according to the World Bank.