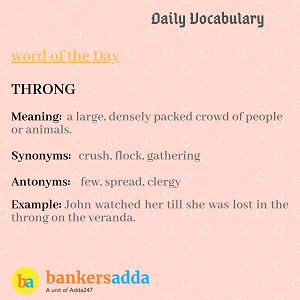 THRONG (noun) : भीड़
Meaning : a large, densely packed crowd of people or animals.
Synonyms : crush, flock, gathering
Antonyms : few, spread, clergy
Example : John watched her till she was lost in the throng on the veranda.

ENFORCEMENT (Noun) : प्रवर्तन
Meaning: the act of compelling observance of or compliance with a law, rule, or obligation.
Synonym: imposition, implementation
Antonym: Disregard, ignore
Example : That’s something the law enforcement people don’t want to do.

PRETENSE (Noun) : दिखावा
Meaning: an attempt to make something that is not the case appear true.
Synonym: make-believe, act,
Antonym: reality, honesty
Example : We tried to keep up the pretense that everything was fine.

SUBSTANTIVE (adjective) : मूल
Meaning: having a firm basis in reality and so important, meaningful, or considerable.
Synonym: biggish, considerable
Antonym: inconsequential, inconsiderable
Example : No substantive changes were made to the document.

COVERT (adjective) : प्रच्छन्न
Meaning: not openly acknowledged or displayed.
Synonyms: secret, furtive, clandestine, surreptitious
Antonyms: overt, above board
Example: Every measure, both overt and covert, is being taken against terrorists.

FARRAGO (noun) : गड़बड़झाला
Meaning: a confused mixture.
Synonyms: mishmash, jumble, hodgepodge, turmoil.
Antonyms: constituent, ravel, sequence, categorization.
Example: The present gun law is a farrago of nonsense as most of it is unenforceable.

VEX (verb) : खीझाना
Meaning: make (someone) feel annoyed, frustrated, or worried, especially with trivial matters.
Synonyms: afflict, agitate, annoy, exasperate
Antonyms: aid, appease, calm, comfort
Example : Because you are having a bad day, do not assume the entire world is out to vex you.