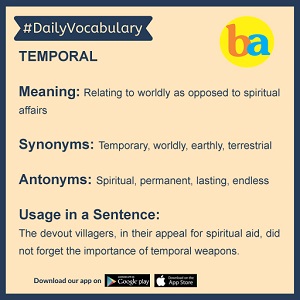 Word: Stereotype : श्रेणीबद्ध करना
Meaning: a widely held but fixed and oversimplified image or idea of a particular type of person or thing.
Synonyms: categorize, pigeonhole, cliché, archetype
Antonyms: differentiate, disorganize, dissimilate,
Usage in a Sentence: It’s not fair to stereotype a whole group of people based on one person you don’t like.

Word: Discard  : रद्द करें
Meaning: get rid of (someone or something) as no longer useful or desirable
Synonyms: throw away, dump, reject, dismiss, waste
Antonyms: keep, retain, embrace, cherish
Usage in a Sentence: Hilary bundled up the clothes she had discarded.

Word: Proselytize : फुसलाना
Meaning: To attempt to convert someone to one’s own religious faith
Synonyms: propagandist, campaigner, crusader
Antonyms: nonpartisan, decode, stay, dissuade
Usage in a Sentence: The efforts of early missionaries to proselytize the Native Americans of Minnesota were largely unproductive.

Word: Exhortation : प्रबोधन
Meaning: an address or communication emphatically urging someone to do something.
Synonyms: persuasion, encouragement, urging
Antonyms: dissuasion, arbitration
Usage in a sentence: After repeated exhortation by his comrades, he finally straightened out his thinking.

Word: Levitation : उत्तोलन
Meaning: the action of rising or causing something to rise and hover in the air, typically by means of supposed magical powers.
Synonyms: lift, rise, upsurge, ascent, ascension
Antonym: ascension
Usage in a Sentence: Apparently he’ll be doing some levitation on the stage tomorrow.