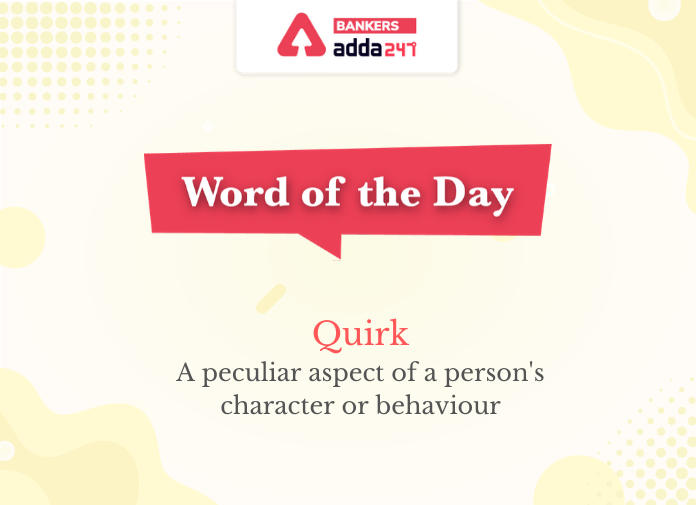 Quirk(Noun) व्यवहार में छल
Meaning: a peculiar aspect of a person’s character or behaviour.
Synonyms: irregularity, a trait
Antonyms: normality,
Usage: His biggest quirk is his love for old marbles.

BITTERSWEET(Adjective) : कड़वा-मीठा
Meaning: tinged with a feeling of sadness
Synonyms: tangerine
Antonyms: happiness
Example: The ending of the romance movie was bittersweet.

Inviolable(Adjective)पवित्र
Meaning: Secure from the violation or profanation
Synonym: unchallengeable, unbreakable,
Antonym: partial
Usage: Everyone has an inviolable right to protection by a fair legal system.

XENOPHOBIC (adjective) जातिवाद करनेवाला
Meaning: having or showing a dislike of or prejudice against people from other countries.
Synonyms: racist, racialist, ethnocentric, ethnocentrist.
Antonyms: bountiful, permissive, thoughtful, lenient.
Usage: As a result, the new parliament is distinctly more xenophobic and illiberal than its predecessor.

INSISTENCE (Noun) आग्रह
Meaning: a solemn and often public declaration of the truth or existence of something
Synonyms: affirmation, assertion, asseveration, avouchment, declaration, profession, protestation
Antonyms: disavowal
Usage: We got to know by the continued insistence that there was a massive cover-up by the government.

Concurrence (noun) सन्निपतन
Meaning: the fact of two or more events or circumstances happening or existing at the same time.
Synonym:concordance, cooperation, coincidence.
Antonym: dissonance, discord.
Usage: Because the events ran in concurrence, the coordinator could not attend both parties at the same time.