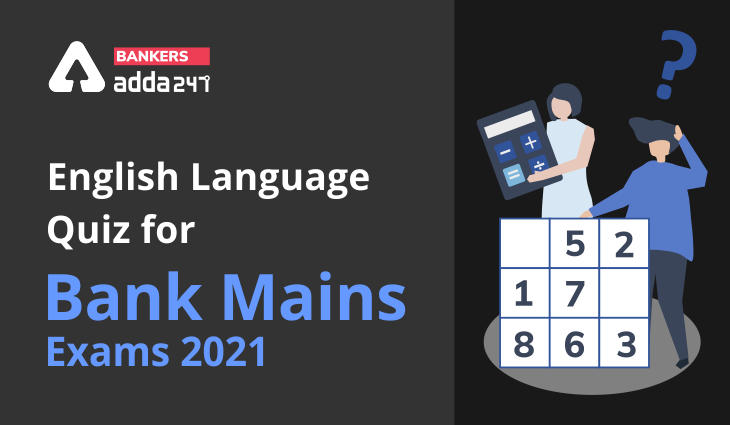 Directions (1-5): In the following paragraph, there is a set of four highlighted words against each number indicated in bold in the beginning of the sentences. One of the given set of words may or may not fit into the statement. Choose the word which is not suitable in the context of the paragraph. If all the four words are correct and feasible, choose (e) i.e. “No error” as your answer.

(1) Far too often, investments in public transportation systems are carried out more as an afterthought, to simply try and approbate with ever-burgeoning demand for commuting and transport. (2) It results in haphazard transport planning, which, in turn, misallocates resources and overburden the system. (3) As India grows fast, with industry and service growing much faster than farm output, more and more people must migrate to towns — some 25 crore people, if half of India becomes urban over the next 15-20 years. (4) They have to be accommodated in new towns: existing towns cannot absorb such huge number. (5) These new towns must be planned to minimise commutes and use public transport for such commutes cannot be averted. Common payment means for bus, train, taxi and shared bike rides would encourage multimodal public transport.

Directions (6-10): In the following paragraph, there is a set of four highlighted words against each number indicated in bold in the beginning of the sentences. One of the given words in each set may or may not fit into the statement. Choose the word which is not suitable in the context of the paragraph. If all the four words are correct and feasible, choose (e) i.e. “No error” as your answer.

(6) The government’s move to rethink the Floor Space Index (FSI) limitation on how high buildings could go is welcome. (7) Dense towns with mixed-land use is the way to go, to minimise commutes and conserve energy. The proper question is not whether to revise the FSI, but whether to do away with it altogether. (8) It is not at all preposterous to suggest that a city can manage without a maximum FSI stipulation. FSI conspiring to limit the built-up space over a given area of land, so that there is sufficient space available for common amenities. (9) FSI is, if best, a tool that can address the availability of amenities indirectly. (10) If, instead of an FSI limitation, the building code were to say that, for every sq. m of built-up space, so many sq m of parking, road, common area, so many schools, commercial spaces, hospitals, drudgery facilities, etc, must be available, that would make for individual building plans to dovetail into overall town planning that makes urban life far more productive and energy efficient.

(11) We live in an age of myriad uncertainties. Political and geostrategic developments around the world today could potentially dispel some of our age-old certainties, values we hold dear, and potentially throw the international system, as we know it, off balance. Not that international politics was ever a truly virtuous space laden with noble intentions. (12) The quasi-unipolar world, if you will, is under great strain, and kept at it: British Prime Minister Theresa May just ended the party announcing that the days of remaking the world are over, without invading other countries to be precise!

The Western attempts (13) will increase and its smaller neighbours would have no option but to acquiesce, we know, but geopolitical considerations. We have witnessed those double standards and hypocrisies in play ever since the beginning of the contemporary world order, created in the interests and image of the victors of the World War II. Of late, we also saw the increasing moral, intellectual and institutional decadence of the transatlantic world order, (14) which left out large chunks of humanity from its often self-serving institutions, including the United Nations. And yet, the curious thing is that an imperfect world order is often better than the absence of any order: we need order, predictability and norms for our collective survival, (15) but he did not threaten actions that placed the entire global system at risk.

Q11. (a) There is yet another downside to this neo-isolationist tendency.
(b) Socialism was certain of the rightness of its views; now it is haunted by uncertainty.
(c) How those negotiations will proceed and how long they will take are anyone’s guess.
(d) China has an unmanageable corporate-debt problem and a government whose commitment to restructuring the economy is uncertain.
(e) No replacement required

Q12. (a) But we believed that it was possible to “make it a better world”
(b) On the contrary, developments in these countries have first-order implications for the world economy
(c) Its global engagement had a strategic rationale behind it
(d) It is not that hard-nosed strategic calculations didn’t matter earlier
(e) No replacement required

Q13. (a) after exporting military power around the world leading to both destruction as well as stability
(b) at remaking the world weren’t born out of altruism or charity
(c) to claim now that it was being too charitable globally is disingenuous
(d) but the potential foundations of multipolarity are nowhere in sight
(e) No replacement required

Q14. (a) uncertainties emanating from emerging markets were not on commentators’ radar
(b) given how emerging markets have accounted for the majority of global growth in recent years
(c) and rejoin if and when the outlook brightened
(d) or undermines fiscal sustainability remains to be seen
(e) No replacement required

Q15. (a) to join precisely in order to achieve faster economic growth
(b) even if something went wrong in the developing world, the countries were simply too small to drag down the global economy
(c) the ongoing war of words between U.S. and Iran could open yet another front in the region
(d) even as we attempt to reform them
(e) No replacement required

S1. Ans. (c)
Sol. The word ‘approbate’ is wrong here as it is not giving a valid and meaningful sentence. The sentence is indicating that public transportation system is trying to meet the increasing demand of commuting and transport. Hence the ‘cope’ which means to handle will be the suitable word.
Approbate means to approve formally.

S2. Ans. (c)
Sol. ‘overburdens’ will be the correct use here in place of ‘overburden’ as the present indefinite tense is used to indicate the fixed arrangement.

S3. Ans. (c)
Sol. The use of ‘must’ is inappropriate here as it is used for necessary or very important thing that happens in the present or future. Here it is not making any sense that people must migrate to towns. ‘will’ will be the appropriate word as it is used to talk about the future, what we believe will happen.

S5. Ans. (e)
Sol. The sentence is grammatically correct. All the four words fit perfectly into the sentence.

S8. Ans. (b)
Sol. Here the use of ‘conspiring’ is wrong as it is not making the sentence valid and meaningful. ‘seeks’ would be the appropriate word here that means attempt or desire to obtain or achieve.

S9. Ans. (a)
Sol. The use of preposition ‘if’ is incorrect here, ‘at’ is the correct use as ‘if’ is used for a conditional sentence. The given sentence is a factual sentence and not a conditional one.

S10. Ans. (b)
Sol. Here ‘drudgery’ is wrong as it means hard menial or dull work. Hence the word that is similar to ‘hospitals, schools, commercial spaces’ should be used here. ‘Recreation’ that means activity done for enjoyment when one is not working, can make the sentence meaningful.

S13. Ans. (b)
Sol. The expression “The Western attempts at remaking the world weren’t born out of altruism or charity, we know, but geopolitical considerations.” makes the sentence complete and meaningful as compared to other options. None of the other options makes a valid relevance to the meaning of the sentence as they fail to connect with the rest of the part of the sentence. Hence option (b) is the correct choice.

S14. Ans. (e)
Sol. Read the paragraph carefully, it is seen that the highlighted part of the sentence goes with the theme of the paragraph, explaining the figures that have been mentioned earlier. So, the expression correctly fits into the sentence, making it meaningful. Once again, the provided options are out of the context and are irrelevant. Hence option (e) is the correct choice.

S15. Ans. (d)
Sol. The use of the subject “he” in the highlighted part suggests that the sentence is incorrectly matched. Among the given options, only the expression “even as we attempt to reform them” gives a reasonable meaning to the sentence. The former part of sentence talks about the need of order, predictability and norms for the collective survival, which can only be complemented by the expression given in the option (d). Moreover, it gives a better conclusion to the sentence as well as the paragraph, unlike other sentences given as options. Hence option (d) is the correct choice.