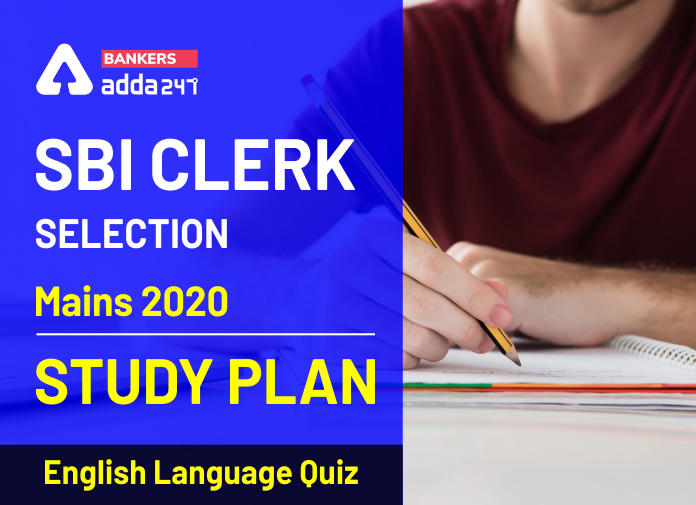 Is your DREAM to get selected in SBI Clerk 2020 recruitment? Well, then you must speed up your preparation as the Main exam which is the final step towards selection will soon be announced. So, students should utilize this time intelligently. The English Language is one of the subjects you’ll need to deal with and to help you keep your preparation up to the mark, here we provide you with a questionnaire of English Language to crack SBI Clerk Main. For other subjects, you can check the SBI Clerk Mains Study Plan. Directions (1-5): In the questions given below few sentences are given which are grammatically correct and meaningful. Connect them by the word given above the statements in the best possible way without changing the intended meaning. Choose your answer accordingly from the options to form a correct, coherent sentence.  Q1.WHILE (A) It was true that the state governments were insisting on keeping the rates high for fear of tax collections falling short. (B) The GST Council, though, has to be careful about applying zero rates on more commodities. (C) It was never clear why the Centre didn’t push for lower rates as it was guaranteeing that states would get 14% growth in their tax revenues in the next five years. (D) The GST Council has also done well to simplify filing for around 95% of assessees since, instead of having to file 37 returns a year, those with a turnover of less than Rs 5 crore a year will file one return a quarter plus one master return in a year. (a)B-D (b)A-D (c)A-C (d) both A-D and B-D (e) none of these Q2.ALTHOUGH (A) They had to diagnose network issues, where the labels were written in pencil on paper, plastic, metal and after 10 years they start to fade. (B) They examined the rest of the garments and each, upon careful observation, was identified in a like fashion. (C) Graphite is a compressed powder, it can be worn off, brushed off, and if it’s on something bound like a notebook, it will most definitely smudge into illegible markings. (D) Some of the markings were so faded they were no longer legible. (a)A-D (b)C-D (c)B-C (d)B-D (e) both A-B and B-C Q3. HOWEVER (A) The Taiwanese government is claiming that the People’s Republic of China would invade the island state if the U.S. withdrew its support for Taipei. (B)It is dubious that Beijing has the amphibious assault capacity or capability to conduct a successful sea-based invasion of Taiwan where a forcible entry is required. (C) One of the factors that has traditionally prevented Beijing from forcibly retaking the island state by force is geography. (D) Chinese capabilities have markedly improved over the course of the past decade and the People’s Liberation Army continues to make strides in capability. (a)C-D (b)A-C (c)A-B (d)A-D (e) None of these Q4. AS (A) The central bank issued a circular three months ago, banning all financial institutions under its control from providing services to companies dealing in crypto currencies. (B) The crypto banking ban by the Reserve Bank of India (RBI) went into effect at the end of last week. (C) A growing number of exchanges have stopped fiat support. (D) Indian crypto currency exchanges ramp up peer-to-peer and crypto-to-crypto trading. (a)A-B (b)C-D (c)A-C (d) both A-D and B-C (e) both D-B and D-A Q5. BUT (A) Ecommerce companies in India have been criticized for predatory pricing. (B) The key officials of China met this week to set economic policy for the next year. (C) Trump campaigned on reducing the US military presence abroad. (D) In office Trump agreed to expand and extend military presence. (a) Only A-D (b) Only C-D (c) Only A-C (d) Both C-D and D-C (e) None of these To attempt the complete quiz refer to the links given below: