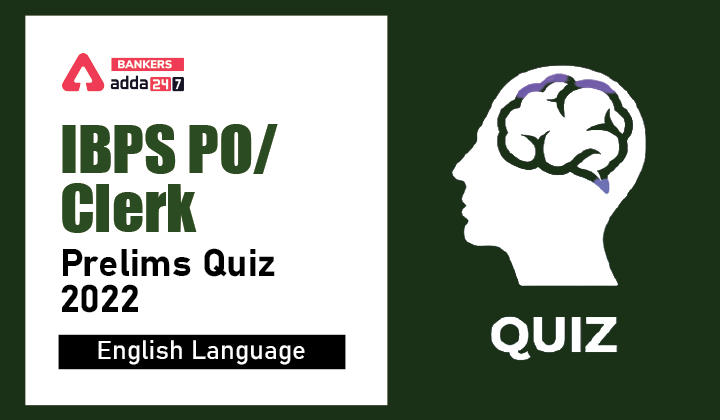 Directions (1-5): The question has two blanks, each blank indicating that something has been omitted. Choose the set of words for each blank that best fits the meaning of the sentences as a whole.

Q1. India’s _________ over the past half century since independence has been unique and _________ in many ways.
(a) thinking, feeling
(b) development, commendable
(c) victory, celebrating
(d) crash, overbearing
(e) regress, praiseworthy

Q3. Not all countries benefit _________ from liberalisation. The benefits tend to _________ first to the advantaged and to those with the right education to be able to benefit from the opportunities presented.
(a) equally, generate
(b) richly, downgrade
(c) suitably, ascribe
(d) uniformly, percolate
(e) judiciously, facilitate

Q5. We will call back the agitation if the Chairman gives an _________ that there will be no _________ of workers.
(a) inkling, harassment
(b) assure, need
(c) explanation, realisation
(d) opportunity, place
(e) undertaking, retrenchment

Directions (6–10); In the following passage there are blanks, each of which has been numbered. These numbers are printed below the passage and against each, five words are suggested, one of which fits the blank appropriately. Find out the appropriate word in each case.

Once upon a time there was a prince who wanted to marry a princess; but she would have to be a real princess. He …(6)… all over the world to find one, but nowhere could he get what he wanted. One evening during a terrible storm; there was thunder and lightning, and the rain poured down in torrents. Suddenly a knocking was heard at the palace door, and the old king went to open it. It was a princess standing out there. But, good gracious ! What a sight the rain and the wind had made her look. The water ran down her hair and clothes; into the toes of her shoes and out again at the heels. And yet she insisted that she was a real princess. Well, we’ll soon …(7)… out, thought the old queen. But she said nothing, went into the bedroom, took all the bedding off the bedstead, and placed a pea on the bottom; then she took twenty mattresses and laid them on the pea, and then twenty quilts on …(8)… of the mattresses. On this the princess had to lie all night. In the morning she was asked how she had slept. “Oh, very badly !” said she. “I scarcely closed my eyes all night. Heaven only knows what was in the bed. But I was lying on something hard, as a…(9)… I am black and blue all over my body. It’s horrible !” Now they knew that she was a real princess because she had felt the pea right through the twenty mattresses and the twenty quilts. Nobody but a real princess could be as irritable sensitive as that. So the prince took her for his wife, for now he…(10)… that he had a real princess.

Directions (11-15) : Read each sentence to find out whether there is any error in it. The error, if any, will be in one part of the sentence. The number of that part is the answer. If there is no error, the answer is (e). (Ignore errors of punctuation, if any)

Q11. Households across the state are either opting for (a)/a more modest lifestyle or compromising on (b)/the nutritional value of their food in efforts to negate (c)/the price rise of essential commodities, cereals, vegetable and fruits. (d)/No error (e)
(a) a
(b) b
(c) c
(d) d
(e) e

S1. Ans. (b); ‘development, commendable’ is the correct use.
Commendable means he showed commendable restraint.

S2. Ans. (a); ‘Abused, supremacy’ is the correct use.
Supremacy means the state or condition of being superior to all others in authority, power, or status.

S3. Ans. (d); uniformly, percolate’ is the correct choice for the fillers.
Percolate means (of a liquid or gas) filter gradually through a porous surface or substance.

S4. Ans. (a); Profound means (of a state, quality, or emotion) very great or intense.
Pregnant means full of meaning; significant or suggestive.

S11. Ans. (c)
Sol. Efforts’ should be replaced by ‘an effort’ because this is singularly related here.

S13. Ans.(c)
Sol. Remove ‘to’ as there is no comparison here in the sentence.