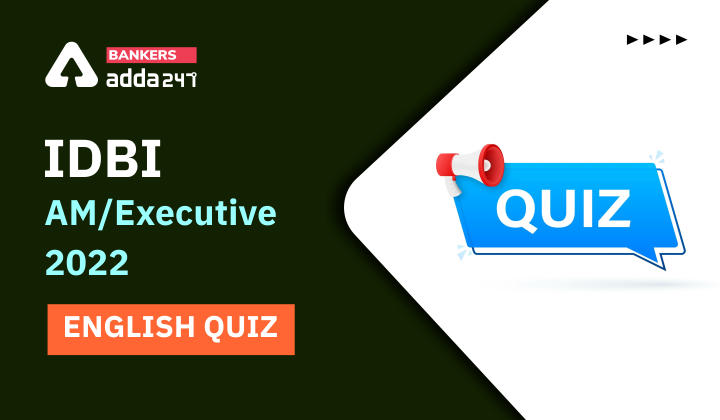 Directions (1-5): In each of the following sentences, a part of the sentence is bold. Below are given alternatives to the highlighted part which may improve the sentence. Choose the correct alternative. Where no improvement is needed choose ‘No correction required’ as the answer.

Q3. Guests must register at the front desk; otherwise, they don’t obtain a key.
(a) will not obtain
(b) don’t obtained
(c) cannot obtained
(d) can obtain not
(e) No correction required

Q5. Because certain scientific theories are contradicting at peoples’ religious beliefs, they are reluctant to accept them.
(a) contracting to
(b) contracting with
(c) conflicting for
(d) contrary to
(e) No correction required

Directions (6-10): Rearrange the following six sentences (A), (B), (C), (D), (E) and (F) in the proper sequence to form a meaningful paragraph; then answer the questions given below them.
(A) “It is possible” said the courtier pensively.
(B) “But I don’t understand how he can be the noblest.”, said the Emperor
(C) The Emperor asked one of his courtier’s if it was possible for a man to be the ‘lowest’ and the ‘noblest’ at the same time.
(D) “He has been given the honour of an audience with the Emperor. That makes him the noblest among all beggars.” said the courtier.
(E) The courtier returned with a beggar. “He is the lowest among your Subjects” he said to the Emperor.
(F) The Emperor then requested that such a person be brought to him.

Q12. The flexibility of the distance learning system is __________ in designing courses which are socially __________ and technically up-to-date.
(a) helpful, relevant
(b) basically, viable
(c) providing, feasible
(d) informative, wide
(e) supportive, challenging

Q15. Archaeology is a poor profession; only ____ sums are available for excavating sites and even more ____ amounts for preserving the excavations.
(a) paltry, meager
(b) miniscule, substantial
(c) average, augmented
(d) judicious, penurious
(e) modest, generous

S1. Ans. (b)
Sol. If the nouns need different prepositions, all the required preposition must be used. After ‘faith’, ‘in’ is to be used.

S2. Ans. (a)
Sol. ‘Who’ is an interrogative and a relative pronoun meaning ‘what person or people’. But ‘whom’ is the objective case of ‘who’, used as a direct or indirect object, e.g., whom did you call? As the sentence is declarative, the word order is ‘they should’ and not ‘should they’.

S4. Ans. (a)
Sol. Parallel construction requires the verb ‘reduce’ to go with ‘eliminate’. Option (b) has ‘in the least’ which makes no sense in the context of the sentence.

S5. Ans. (d)
Sol. It is preferable to use simple present or past in such sentence conveying a general fact or view. The use of a continuous tense needs to be avoided as no action is being continually performed.

S6. Ans. (a)
Sol. The sequence of the paragraph is CFEBAD.

S7. Ans. (e)
Sol. The sequence of the paragraph is CFEBAD.

S8. Ans. (c)
Sol. The sequence of the paragraph is CFEBAD.

S9. Ans. (a)
Sol. The sequence of the paragraph is CFEBAD.

S11.Ans.(b)
Sol.
Debate means to argue about (a subject), especially in a formal manner.

S12.Ans.(a)
Sol.
Relevant means closely connected or appropriate to the matter in hand.

S13.Ans.(d)
Sol.
‘Shortly; Draw out’ is the correct option.
Shortly: in a short time; soon
‘Draw out ’ means to elicit (information)

S14.Ans.(a)
Sol.
Subtle meaning making use of clever and indirect methods to achieve something.

S15.Ans.(a)
Sol.
The part after the semicolon expands upon the first part of the sentence.
So, since the first part tells us that there is no money in archaeology, then there will only be small (paltry) amounts for excavating. Also ‘even more’ indicates that another similar word is required. Thus, meager also means small.