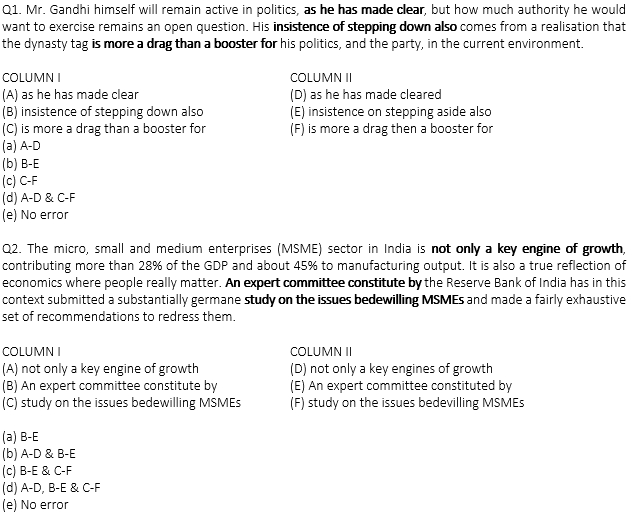 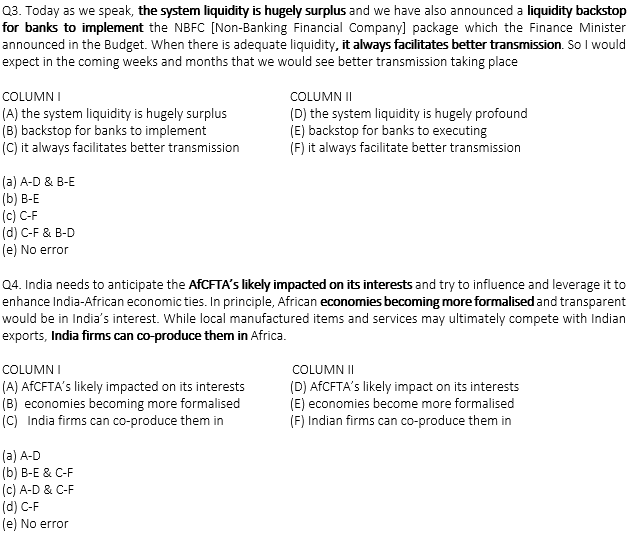 Directions (6-10): In each of the following questions, a paragraph is given with three blanks and these blanks have to be filled with the same word. You are provided with four options which may or may not fill the given blanks. Choose the option which can fill all three blanks. If none of the option is suitable then choose option (e) ‘None of these’ as your answer.

S1. Ans. (b)
Sol. Here, phrases (A) and (C) are grammatically correct whereas improvement is required in (B). Here, there is an error of preposition where “insistence of” will be replaced by “insistence on”. Hence, option (b) is the most suitable answer choice.

S3. Ans. (e)
Sol. All the highlighted phrases are grammatically and contextually correct and therefore do not require any improvement. Hence, option (e) is the most suitable answer choice.

S4. Ans. (c)
Sol. The phrases given in (A) and (C) are grammatically incorrect and therefore require changes. As from the former part of the statement, we can infer that the paragraph is in present tense, therefore, we will replace “impacted” with “impact. Hence, A-D will be the correct replacement. Also, in the concluding lines, “firms” which is a noun will not be qualified by a noun [India] and will instead be qualified by an adjective [Indian]. Therefore, C-F is also the correct replacement. Hence, option (c) is the most suitable answer choice.

S5. Ans. (d)
Sol. In the highlighted phrases, (B) and (C) are incorrect and therefore need replacements. In the statement (B), “nonchalant” which means “showing or having a relaxed manner
free from concern or excitement” will be replaced by “notified” which means “give notice of or report (something) formally or officially.” Also, in statement (C), “dispiriting” will be replaced by “encouraging” as we can infer that the bill was passed to promote investments. Hence, option (d) is the most suitable answer choice.

S6. Ans. (b)
Sol. The word that fits in the given blanks correctly is “Approach”. Using “Approach” makes the paragraph contextually meaningful and grammatically correct.
Dregs means a small residue
Strait means a difficult situation, especially because of financial problems
Abject means showing lack of self-respect

S7. Ans. (a)
Sol. Reading the paragraph one can infer that “Insolvent” fits in the given blanks. Hence, option (a) is correct answer choice.
Fawning means praise someone too much
Aegis means with the protection or support of someone or something, especially an organization
Doggerel means poetry that is silly or badly written

S9. Ans. (b)
Sol. “Defer” means “put off (an action or event) to a later time; postpone”. The Councillors decided to defer a controversial mill extension. Hence, option (b) is correct answer choice.
Platitude: a statement that has been repeated so often that it is meaningless
reticent: disinclined to talk, not revealing one’s thought
buoyant: cheerful and optimistic.

S10. Ans. (c)
Sol. The word “strong” is correct choice. All other words don’t go with the theme of the given passage.
Eloquent: fluent in speaking or writing.
Precarious: in a way that is not securely in position and is likely to fall or collapse
Impound: seize and take legal custody of (something, especially a vehicle, goods, or