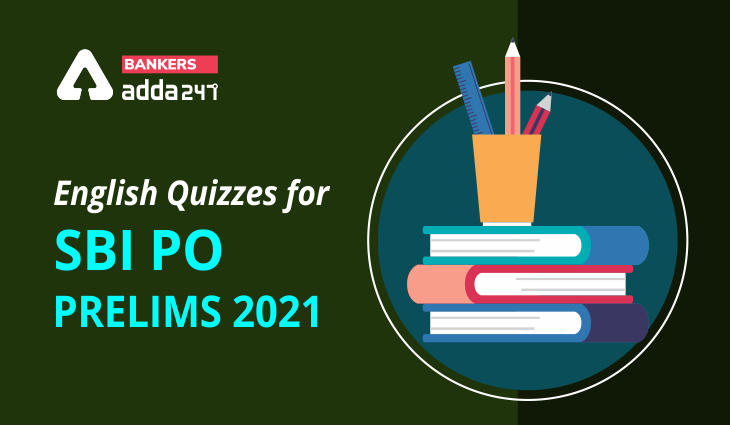 Directions (1-10): Which of the following phrases (I), (II), and (III) given below each sentence will fit into the blank to make the sentence grammatically correct? Choose the best option among the five given alternatives that reflect the correct use of phrase in the context of the grammatically correct sentence.

Directions (11-15): In each of the following questions, four sentences are given. Choose the sentence among the four options which is grammatically incorrect or carrying a grammatical/idiomatic error in it as the answer. If there is no error in any of the sentences, choose (e), i.e. “All are correct” as the answer.

Q11.
(a) Are you talking about the world turning into a mushroom?
(b) I suppose fungi and fungible sound similar and hence the confusion.
(c) One should sublimate completely the ego by abandoning oneself to God or Universal Consciousness.
(d) It is possible that some places may be more conducive to create deep thought and creativity.
(e) All are correct

Q12.
(a) Defeating terrorism in Afghanistan needs every stakeholder to put aside differences, and acknowledge that the current situation is a danger to all.
(b) Japan, with a $300 billion trading relationship with China, too wants to ensure it remains engaged with the world’s second largest economy.
(c) It is necessary for both to take a more hard-headed, realistic view of the road ahead.
(d) The India-China relationship has always been too complex to classify under a single theme.
(e) All are correct

Q13.
(a) Seniority is not the sole consideration while elevating a High Court judge to the apex court.
(b) There is a constant striving to either get something or to enjoy something.
(c) In economics, fungibility is the property of a good or commodity whose individual units are essentially interchangeable.
(d) Under the UPA government, the Minister in charge wondered aloud in 2007 about who would keep a watch on the quality of meals served.
(e) All are correct.

Q14.
(a) Spanish properties with fire-places have a habit of attracting birds which get trapped in the chimney.
(b) On your arrival back to Spain, you may find an ant colony has taken over to your kitchen.
(c) In Jharkhand, dry rations such as oil, dal, wheat or rice were given to mothers — until the contractor lobby forced the government to shift in favour of processed food.
(d) To remove all types of mental agitations, one needs to get to the root.
(e) All are correct

Q15.
(a) The being of humans are a reflection of that divine reality and a longing and love for recognition and attainment of God.
(b) Consider that you may need someone to take care of it whilst you are back in the UK.
(c) Water can be cut off at any time due to water shortages or if the Water Company are working in the area.
(d) If you want your life to be trouble-free, and have plenty of ‘fun in the sun’, then employ a Spanish Property Management team who are able to take all the worry off your hands.
(e) All are correct

S1. Ans. (b)
Sol. Both the expressions (I) and (II) are correct and fill the blank correctly and convey the proper meaning of the sentence, while expression (III) is incorrect. Expression (I) and (II) expresses a similar context of desire to expand or strengthen the delivery capabilities by setting up more warehouses. However, expression (III) fails to comprehend the grammatical syntax of the sentence as the event [Amazon is setting up five more warehouses] is in present continuous tense therefore the parallel event [looks to strengthen its delivery] or [desires to expand its retailing] associated to it should be in present tense as well. Hence, option (b) is the most suitable choice.

S2. Ans. (a)
Sol. Only expression (III) is correct. “extra shine” is phrase used to make something or some feature appear bright/attractive or to point light somewhere. Therefore, after achieving the leadership position in the market SBI is highlighting its new added feather in the cap. However, expression (I) [hopes to climb] indicates a future event but the phrase [recently acquired in the market] indicates that the action has already been achieved. While expression (II) hints a possibility of future achievement therefore expression (I) and (II) fail to adhere to the grammatical syntax and contextual meaning of the sentence. Hence, option (a) is most viable answer choice.

S3. Ans. (d)
Sol. Only expression (I) and (III) completely satisfies the context of the sentence. The phrase [need to fix this to safeguard its profitability in future] indicates a negative action that needs to be fixed which is expressed in expression (I) and (III). However, expression (II) describes a positive action [distributes the protection] which will increase the profitability in future. Thus, it fails to make the sentence comprehensive. Hence, option (d) becomes the most feasible answer choice.

S4. Ans. (c)
Sol. Only (II) is right while expressions (I) and (III) are incorrect. Expression (I) does not make sense to the sentence as “downfall of the economy” cannot protect a country from the “external shocks”. Moreover, in expression (III) ‘sustain’ means strengthen or support physically or mentally therefore a restriction for an economy to sustain again fails to protect the country from external shocks. However, expression (II) [closed nature of its economy] indicates a restriction on foreign transactions which will help the country’s economy to sustain external shocks. Hence, option (c) is the most suitable answer choice.

S5. Ans. (e)
Sol. All the given three expressions can be used to fill the blank making the sentence coherent. It is to be noted that “to make calls for” is a phrase used to express a request or demand. Therefore, as all the three expressions make the sentence grammatically correct and contextually meaningful option (e) becomes the most suitable answer choice.

S7. Ans. (b)
Sol. Only expression (III) provides an appropriate context to the sentence. Expression (II) becomes incorrect as the sentence is expressing a relationship or equation between two objects [monetary policies and fiscal policies] therefore, the correct preposition required here is “between” instead of “among”. Moreover, expression (I) fails to provide a coherent meaning to the sentence. Hence option (b) becomes the most suitable answer choice.

S9. Ans. (d)
Sol. Only expression (I) and (II) are correct. It is to be noted that ‘to blow something wide open’ means to expose corrupt practices or a secret plan. Thus, expression (I) and (II) perfectly fits in the context and grammatical syntax of the sentence. Moreover, the phrase ‘pull over’ means move to the side of or off the road, therefore, expression (III) fails to add meaning to the sentence. Hence, option (d) is the most suitable answer choice.

S10. Ans. (e)
Sol. All the given three expressions can be used to fill the blank making the sentence coherent. It is to be noted that the sentence is describing about a pathbreaking or an innovative act that benefits consumer.
Therefore, as all the three expressions make the sentence grammatically correct and contextually meaningful option (e) becomes the most suitable answer choice.

S11. Ans. (c)
Sol. The error is in sentence (c) as completely should be placed before sublimate.
‘Completely’ is an adverb; Adverb provides more information and modify verbs, clauses and other adverbs. Here ‘completely’ is giving us the information about ‘sublimation’, which is a verb and it means to divert or modify into a culturally higher or socially more acceptable activity.
All other sentences are grammatically correct and do not require any improvement.
Hence option (c) is the correct choice.

S12. Ans. (e)
Sol. All the given sentences are grammatically correct.
Hence option (e) is the correct choice.

S13. Ans. (e)
Sol. All the given sentences are grammatically and contextually correct. Therefore, option (e) is the most suitable answer choice.

S14. Ans. (b)
Sol. All the sentences except sentence (b) are correct.
In sentence (b), the use of ‘to’ is superfluous.
The phrasal verb ‘Taken over’ means to begin to have control of something, which does not require any preposition. It must be followed by the object.
Hence option (b) is the correct choice

S15. Ans. (a)
Sol. Sentence (a) is incorrect here.
‘are’ should be replaced by ‘is’ as the subject (being of humans) of the sentence is singular.
In subject-verb agreement, singular verb is used for singular subject.
All the other sentences are correct and do not require any rectification.
Hence option (a) is the correct choice.