FCI Recruitment 2021: Good News for all the aspirants, Bankers Adda team is coming up with Exclusive Questions of Agriculture for FCI AGM 2021 on the Adda247 app also, so download the Adda247 App now to attempt these quizzes. We have started this series on 18th March 2021. So, do attempt it daily from today and crack the FCI AGM 2021 Exam.

Q1. The development of high-yielding-varieties (HYV) of wheat and rice is known as

Explanation:- The Green Revolution in India refers to a period in India when agriculture was converted into an industrial system due to the adoption of modern methods and technology, such as the use of high-yielding variety (HYV) seeds, tractors, irrigation facilities, pesticides, and fertilizers.

Q2. The greenhouse effect is the phenomenon by which

Explanation:- The greenhouse effect is a natural phenomenon allowing life to occur on the planet. It is caused by a series of greenhouse gases (water vapor, carbon dioxide, methane and nitrous oxide) that absorb part of the energy, while the remainder escapes into space.

Q3. Low productivity of agriculture in India is not caused by

Explanation:- Inadequate means of transport forces the farmers to sell their produce to local money lenders at low prices. Due to a lack of warehousing facilities, farmers can not able to store their produce when prices are low. So these attribute a lot to the low productivity of agriculture.

Q4. Reclamation of alkali soil by use

Explanation:- Reclamation of alkali soils requires the removal of exchangeable sodium and its replacement by calcium. This is accomplished by the application of gypsum or any other chemical amendment including several industrial wastes such as phospho-gypsum, distillery spent wash (DSW), etc.

Explanation:-  Red soils are generally formed from sedimentary rocks which are rich in iron.

Explanation:- Alluvial soils are by far the largest and the most important soil group of India. The widest occurrence of the alluvial soils is in the Indo-Gangetic Plain starting from Uttar Pradesh, Bihar, West Bengal, and Assam in the east, northern parts of Gujrat also have some covers alluvial soils.

Explanation:- Khaddar soil consists of new alluvial soil relatively higher in new silt content from the river, gets replenished with each flooding cycle, and is often very fertile.

Q8. In a particular area, special arrangement of the crop is called

Explanation:- Cropping pattern refers to the proportion of land under cultivation of different crops at different points of time. This indicates the time and arrangement of crops in a particular land area.

Q9. Which of the following is a cash crop?

Explanation:- A sugarcane crop is sensitive to climate, soil type, irrigation, fertilizers, insects, disease control, varieties, and the harvest period. … Sugarcane is a cash crop, but it is also used as livestock fodder.

Q10. Which of the following is the largest food grain-producing state of India?

Attempt this Quiz on the App 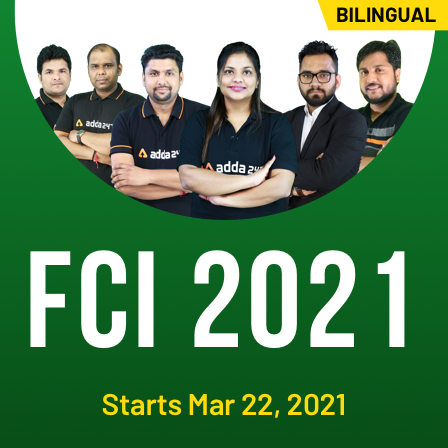