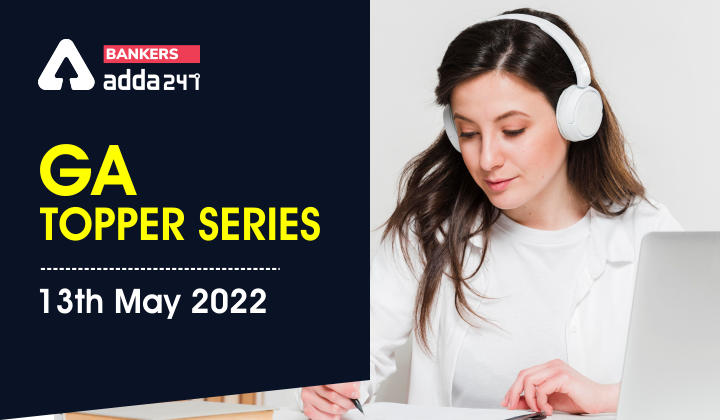 GA Topper Series: 13th May 2022: Hello Students, all those students who have cleared their prelims exams in the banking sector must be prepared with every topic in the General Awareness Section for the mains examinations. Bankersadda team has brought you up a new series in which we will come up with 10 questions with the correct answer and the detailed solution to the question.

Q2. How many members are there in the North Atlantic Treaty Organization Cooperative Cyber Defence Centre of Excellence?
(a) 32
(b) 27
(c) 34
(d) 30

Q5 Leonid Makarovych Kravchuk has recently passed away. He belongs to which country and profession?
(a) Russia, Actor
(b) Chile, Singer
(c) Ukraine, politician
(d) None of these

Q6 What is the reason to celebrate National technology day?
(a) The day when CV Raman found the scattering effect.
(b) The day on which India successfully conducted the Pokhran nuclear test (Pokhran II) code-named Operation Shakti
(c) Birthday of Abdul Kalam
(d) None of these

Q7. Which of the following comes under PM Jan Suraksha Yojana

Q9. Which mini Ratna launched the PM Wani scheme across 100 train stations?
(a) Centra for a railway information system (CRIS)
(b) Railtel
(c) National information centre
(d) All of the above.

Q10. Which of the following is the Indian site of the Indus valley civilization
(a) Mohenjo-Daro
(b) Rakhi Garhi
(c) Dholavira
(d) Lothal

Ans 2. (a)
South Korea became the first Asian country to join in North Atlantic Treaty Organization Cooperative Cyber Defence Centre of Excellence (NATO CCDCOE). South Korea has participated in the Locked Shields 2022, the largest and most complex annual international live-fire cyber defence exercise in the world. It has been participating two years in a row since 2020
Now, the total NATO CCDCOE has 32 countries as its official members which include 27 NATO member countries and 5 five non-NATO states as contributing participants.
Finland Wins Cyber Defence Exercise Locked Shields 2022.

Ans 3. (a)
Bharti AXA Life Insurance has launched the financial literacy campaign ‘InspiHE₹-Enabling an empowered future’, a special initiative to enhance financial awareness among women and empower them to make informed financial decisions for a secure future.
Bharti AXA General Insurance has launched Krishi Sakha App, a one-stop shop for Indian farmers that offers them relevant information to cater to their daily farming needs.
Bharti AXA Life Insurance has appointed National Award-winning actress VidyaBalan as it’s Brand Ambassador. She as the brand ambassador will help in promoting the #DoTheSmartThing

Ans 4. (d)
Indian Architect Balkrishna Vithaldas Doshi was bestowed with the prestigious Royal Gold Medal 2022, one of the world’s highest honours for architecture, by the Royal Institute of British Architects (RIBA), London, United Kingdom (UK)
Guruswamy Krishnamoorthy to receive The Most Excellent Order of the British Empire (Civil Division) Award 2022 – Honorary Member.
The founder of the educational charity ‘Bidyanando’ Kishore Kumar Das from Bangladesh has been chosen for the United Kingdom’s Commonwealth Points of Light Award.
The former Honorary Consul of Peru in Mumbai, Ardeshir B.K. Dubash has received the Order of “Merit in the Diplomatic Service of Peru Jose Gregorio Paz Soldan”.

Ans 8. (a)
Section 124A IPC:
It defines sedition as an offense committed when “any person by words, either spoken or written, or by signs, or by visible representation, or otherwise, brings or attempts to bring into hatred or contempt, or excites or attempts to excite disaffection towards the government established by law in India”.

Ans 9. (b)
RailTel, a micro Ratna PSU, launched the PM-WANI scheme on Monday, providing access to its Public WiFi services across 100 train stations in 22 states.

Ans 10 (a)
Mohenjodaro is in Pakistan
Why this question?
With the excavation of a 5000-year-old jewelry-making factory, the Archaeological Survey of India (ASI), which has been working in Rakhi Garhi, Haryana.