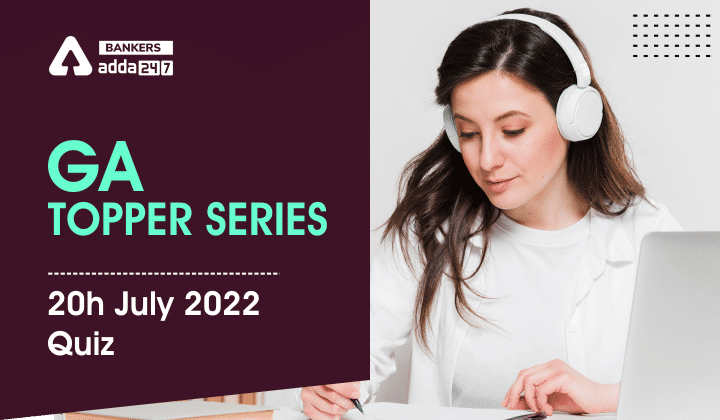 GA Topper Series: 20th July 2022: Hello Students, all those students who have cleared their prelims exams in the banking sector must be prepared with every topic in the General Awareness Section for the mains examinations. Bankersadda team has brought you up a new series in which we will come up with 10 questions with the correct answer and the detailed solution to the question.

Q1. Which edition of Innovation index is being launched by Niti Aayog ?

Q2. What is the name of the autobiography of Dr APJ Abdul Kalam?

(a) Building a New India

Q3. In which year National Ayush Mission was launched ?

Q5. Agriculture Skill Council of India comes under which ministry ?

(a) Ministry of agriculture and farmer welfare

(b) Ministry of Skill Development and Entrepreneurship

Q6. Who became the MD and CEO of NSE?

Q8. What is the launch year of National Mission on Oilseeds and Oil palm (NMOOP) for Oilseeds & Oil palm development programme?

Q9. Who become the first person to ever win a men’s skeet gold medal at an ISSF World Cup?

with the introduction of 66 unique indicators, as compared to the 36 indicators used in the preceding edition

Dr Kalam’s autobiography ‘Wings of Fire’. All other books are also written by D Kalam.

Ministry of Ayush, Government of India had implemented the Centrally Sponsored Scheme of the National Ayush Mission (NAM) from the financial year 2015-16 to 2020-21 to promote the cultivation of Medicinal Plants throughout the country.

Ministry of Skill Development and Entrepreneurship takes special initiative for skill development among youth who want to pursue a career in the agriculture sector, though apprenticeship programmes, vocational training courses in schools and higher educational institutes. Various initiatives implemented through Agriculture Skill Council of India (ASCI), a subsidiary under Ministry of Skill Development and Entrepreneurship are furnished below:

The National Stock Exchange (NSE) has announced the appointment of Ashish Kumar Chauhan as its new managing director and CEO.

National Mission on Oilseeds and Oil palm (NMOOP) for Oilseeds & Oil palm development programme in this country was started in 2014-15 and continued up to 2017-18.As per the decision of Cabinet Secretary regarding merger/ conversions or linkage of Schemes/ subSchemes/ programmes, etc. having similar components such as incentive for seed, demonstration, and farm implements including efficient water application tools covered under NFSM and Oil seeds was merged under revamped NFSM from the year 2018-19

Veteran Indian shooter Mairaj Ahmed Khan made history by becoming the first person to ever win a men’s skeet gold medal at an ISSF World Cup.