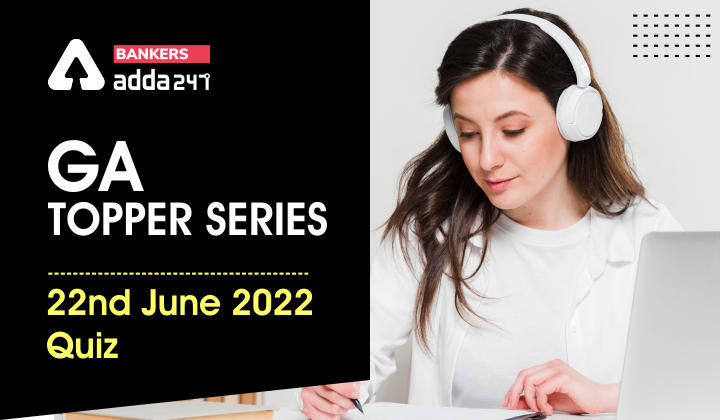 GA Topper Series: 22nd June 2022 Quiz: Hello Students, all those students who have cleared their prelims exams in the banking sector must be prepared with every topic in the General Awareness Section for the mains examinations. Bankersadda team has brought you up a new series in which we will come up with 10 questions with the correct answer and the detailed solution to the question.

Q1. Where the Karte Parwan Gurudwara is located?

Q2. Match the books with their author

Q3. Purana Kila was built by?

(a) Sher Shah suri only

Q6. Which telecom company launched Xstream multiplex in the metaverse?

Q7.____________ has become the first Indian to be recognized as the Global Sustainable Development Goal (SDG) Pioneer for water stewardship.

Q9. Which country retained its position in the grey list of FATF?

Q10.  What is the name of china’s domestically made naval warship?

The Prime Minister, Shri Narendra Modi has condemned the cowardly terrorist attack against the Karte Parwan Gurudwara in Kabul, Afghanistan. He also prayed for the safety and well-being of the devotees.

The medieval fort of Purana Qila or Old Fort was built between 1538 and 1545 by the Mughal emperor Humayun and his intercessor Sher Shah Suri, on the site of the ancient city of Indraprastha, home of the Pandavas in the Mahabharata Epic.

Ministry of Culture in collaboration with the Archaeological Survey of India (ASI) organized ‘Yoga Mahotsav’ at Purana Qila, New Delhi, as part of the International Day of Yoga 2022 celebrations

In a first in India, the Indira Gandhi International Airport in Delhi introduced a radio-frequency identification (RFID) enabled baggage tags which will give passengers real-time information about the location of their luggage. The RFID technology will be personalized and help to arrive passengers keep track of their check-in luggage. The bag tags will be called ‘Bagg Trax’, and It will not only help domestic and international arrival passengers but also those in transit to track their checked-in baggage

European Commission has made a historic step in recommending that Ukraine and Moldova be granted European Union (EU) candidate status, paving the way for them to progress from former Soviet republics to developed economies in the world’s largest trade bloc, the EU

Airtel has launched Xstream multiplex, India’s first multiplex in the metaverse on the Partynite Metaverse platform. The Xstream multiplex is an extension of Airtel’s Xstream Premium offering. Xstream is a 20-screen platform with access to content portfolios from leading (Over-The-Top) OTT partners available on its application.

Ramakrishna Mukkavilli has become the first Indian to be recognized as the Global Sustainable Development Goal (SDG) Pioneer for water stewardship by the United Nations Global Compact (UNGC). It is for the first time that an Indian has been recognized for the position.

Senior Diplomat Ruchira Kamboj, currently Indian ambassador to Bhutan, has been appointed as the next Permanent Representative of India to the United Nations in New York.

Federation Internationale de Football Association(FIFA -International Federation of Association Football) announced that the FIFA World Cup 2026 will be jointly hosted by the United States (US), Canada, and Mexico. for the first time in the history of FIFA World Cup, the event will be hosted by 3 countries. FIFA has selected 16 cities from these countries through a bid

Pakistan will continue to be on the “Grey List” of countries under increased monitoring by the Financial Action Task Force (FATF),

In the Indian Coast Guard, a new air squadron known as 840 Squadron was established in Chennai, with an Advanced Light Helicopter (ALH) Mark-III aircraft as its first aircraft