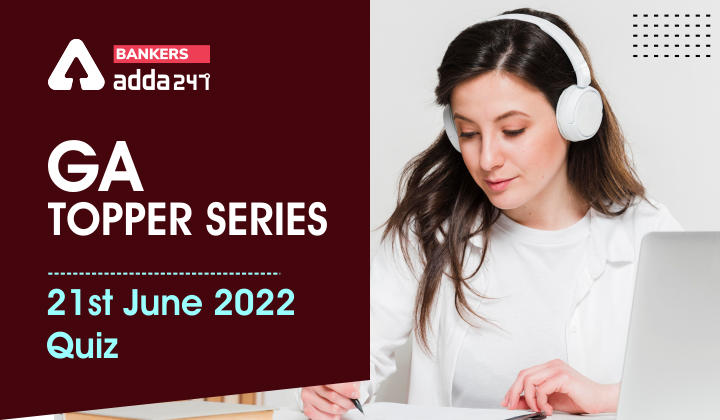 GA Topper Series: 21st June 2022 Quiz: Hello Students, all those students who have cleared their prelims exams in the banking sector must be prepared with every topic in the General Awareness Section for the mains examinations. Bankersadda team has brought you up a new series in which we will come up with 10 questions with the correct answer and the detailed solution to the question.

Q1. What is the raised limit of Additional Factor of Authentication for e-mandates on cards, and PPI for recurring transactions?

Q2. The world’s largest living plant has been identified in the shallow waters off the coast of ______

Q4. Which country is the largest importer of broken rice from India?

Q5. Who among the following became the prime minister of Somalia?

Q6. Did Centre announce a 10% reservation for Agniveers in which of the following forces?

Q8. Which Asian country will be first time attending the NATO summit?

Q10. Consider the statements about Svadha:

The world’s largest living plant has been identified in the shallow waters off the coast of Western Australia. The sprawling seagrass, a marine flowering plant known as Posidonia australis, stretches for more than 112 miles (180 kilometres) in Shark Bay, a wilderness area protected as a World Heritage site.

Zomato and Jio-bp have entered into an agreement to support Zomato’s commitment towards “The Climate Group’s EV100 initiative of 100 per cent EV fleet by 2030.” The collaboration is poised to accelerate EV adoption in the rapidly growing Indian delivery and transportation segment. Jio-bp, the fuel and mobility joint venture between Reliance Industries Ltd and bp, will provide EV mobility services to Zomato and access to ‘Jio-bp pulse’ battery swapping stations for last-mile delivery.

Centre announced a 10% reservation for Agniveers in the Central Armed Police Forces (CAPF) and Assam Rifles recruitment. The Ministry of Home Affairs also decided to grant a three-year age relaxation to Agniveers in the CAPFs and Assam Rifles who are between the ages of 17.5 and 21. Notably, the initial class of recruits will be given a five-year extension on the maximum age limit.

On 15th June, Global Wind Day is celebrated across the world, annually and it is marked as a day of discovering the possibilities of wind power.

The International Day of Family Remittances (IDFR) was adopted by the United Nations General Assembly and is observed on 16 June.

The World Day to Combat Desertification and Drought is observed on 17 June each year to promote public awareness of international efforts to combat desertification.

Japanese Prime Minister, Fumio Kishida will attend this month’s NATO summit in Madrid, becoming the country’s first leader to join a top meeting of the transatlantic alliance. The June 28-30 gathering is seen as a crunch moment for the 30 North Atlantic Treaty Organization allies, four months into Russia’s war in Ukraine.

Neeraj Chopra clinched his first top podium finish of the season by winning the javelin throw event at the Kuortane Games in Finland.

Neeraj Chopra will be leading a 37-member Indian athletics team at the upcoming Commonwealth Games, the Athletics Federation of India announced.

Keeping in view the core ideology of Yoga, the design team at CoEK has designed a range of ‘Wellness wear’ ‘Svadha’ to showcase the versatility of khadi on International Yoga Day. In Atharva Veda, ‘Svadha’ means ease, comfort or pleasure, which are truly the attributes of this collection.