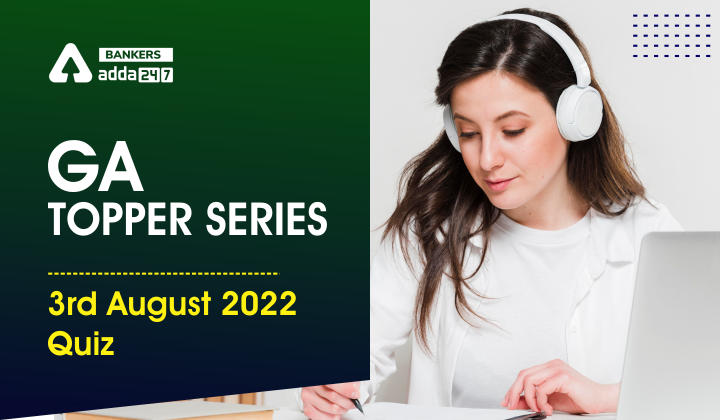 GA Topper Series: 2nd August 2022: Hello Students, General Awareness is an essential part of all government exams. It’s better to prepare this section daily and revise the same using the factsheet provided. Bankersadda team has brought you up a new series in which we will come up with 10 questions and answers, other options of the question have related news to them. So don’t miss reading the solutions.

Q1. Who has been appointed as Principal Director General of the Press Information Bureau (PIB).?

Q2. The World Bank has appointed Auguste Tano Kouamé as the Country Director for India. He will be replacing whom?

Q4. Indian Council for Cultural Relations (ICCR) gave Distinguished Indologist for 2021 to which of the following person?

Q6. The Udyam Portal was launched in which year?

Q7. Ministry of Culture organized “TirangaUtsav to celebrate the contributions of which freedom fighter?

Q8. At what interval National Family Health Survey is conducted?

Q9. Muslim Women’s Rights Day is observed every year on which year?

Q10. National Database on Sexual Offenders” (NDSO) was launched in which year?

Centre announced that it will set up a task force to keep track of monkeypox cases in India. Dr. VK Paul, Member (Health), Niti Aayog, will serve as the team’s leader.

Former Philippine President Fidel Valdez Ramos, has passed away due to the complications of COVID-19.

The World Bank has appointed Auguste Tano Kouamé as the Country Director for India, effective. He replaces Junaid Kamal Ahmad who recently completed a five-year term.

Environmental Insights Explorer data from Google was officially released in Aurangabad on Wednesday, according to the Aurangabad Smart City Development Corporation Limited.

Jeffrey Armstrong has been awarded the Indian Council for Cultural Relations (ICCR) Distinguished Indologist for 2021.

Ministry of MSME celebrated the landmark of 1 crore registrations on its Udyam Portal today. Following the adoption of the revised definition of Micro, Small and Medium Enterprises (MSMEs) on 26th June, 2020, which is based on investment in plant & machinery or equipment; and turnover, the Udyam Registration Portal was launched on 1st July, 2020.

Ministry of Culture organized “TirangaUtsav” -an evening filled with cultural and musical performances to celebrate the contributions of PingaliVenkayya to the nation on the occasion of his 146th Birth Anniversary in New Delhi.

Ministry of Health and Family Welfare (MoHFW) conducts one integrated survey namely National Family Health Survey (NFHS) at an interval of about 3 years and so far, completed five rounds of survey

Muslim Women’s Rights Day is observed every year on the 01st of August to celebrate the enforcement of the law against the ‘Triple Talaq’ rule among Muslims. According to the Shariat or Muslim Personal Law