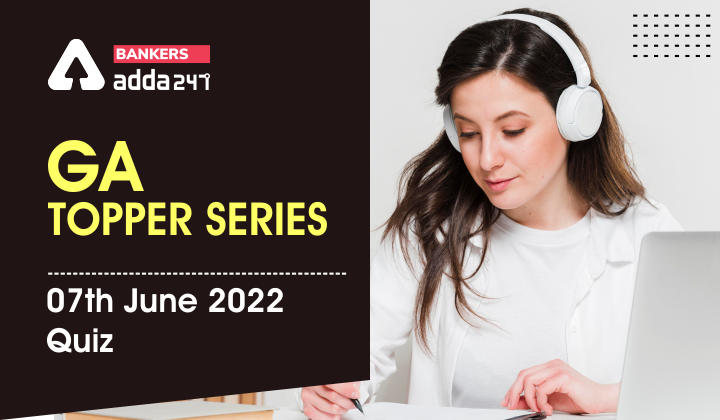 GA Topper Series: 7th June 2022 Quiz: Hello Students, all those students who have cleared their prelims exams in the banking sector must be prepared with every topic in the General Awareness Section for the mains examinations. Bankersadda team has brought you up a new series in which we will come up with 10 questions with the correct answer and the detailed solution to the question.

Q1. What is the percentage of annual accruals of EPFO invested in debt instruments?

Q2. How much percent of salary is contributed by employees and employers together in EPF?

Q3. eSanjeevani portal is developed by?

Q4. What is the radius of the National wildlife sanctuary or national park where new permanent structure construction is not permitted?

Q5. Which organization has released this report Global Plastics Outlook Policy Scenarios to 2060?

Q6. What is the name of India’s first banking metaverse?

Q7. Kotak cherry platform is for what purpose?

Q8. Which of the following secured the 9th rank in Bloomberg Billionaire Index?

Q9. Which organization has joined the PACE mission of NASA?

The EPFO invests 85% of its annual accruals in debt instruments, including government securities and bonds, and 15% in equity through ETFs (Exchange-Traded Fund). The earnings from both debt and equity are used to calculate the interest payment. The present interest rate of EPFO is 8.1%

It should be noted that EPF is the main scheme under the EPF and Miscellaneous Provisions Act, 1952. Under this, both employees and employers together contribute 24% of the basic salary plus Dearness Allowance (DA) on a monthly basis. • The employee gets this lump sum amount with interest on retirement.

eSanjeevani Portal was developed by the Centre for Development of Advanced Computing (C-DAC), a premier R&D organization of the Ministry of Electronics and Information Technology (MeitY), Government of India

Organization for Economic Co-operation and Development(OECD) released a new report (preliminary version) titled “Global Plastics Outlook Policy Scenarios to 2060” which states that the Global plastic waste set to almost triple by 2060 due to economic and population growth.

India’s first banking metaverse namely ‘Kiyaverse’ has been launched by Kiya.ai in Mumbai, Maharashtra which intends to merge use cases of real-world banking with metaverse banking through an avatar (virtual humanoid) based interactions. Kiyaverse will allow customers to transact, access banking information, and obtain various banking products virtually from the comfort of their own homes

According to the Bloomberg Billionaire Index, a daily ranking of the world’s richest people, Mukesh Ambani, Chairman and Managing Director(CMD) of Reliance Industries Limited (RIL) became the richest man in India as well as in Asia with a net worth of USD 99.7 billion, surpassing Gautam Adani, chairman, and founder of the Adani Group whose net worth was at USD 98.7 billion.

Elon Musk, Chief Executive Officer (CEO) of Tesla and SpaceX, remained the World’s richest man with a net worth of USD 227 Billion

Datair Technology Private Limited (Ambee), a Bengaluru (Karnataka) based private firm, has joined the PACE (Plankton, Aerosol, Cloud, ocean Ecosystem) mission of the National Aeronautics and Space Administration(NASA), the space agency of the United States of America(USA) as an early adopter.

Javier Olivan, the current chief growth officer at Meta Platforms, will take over as the company’s chief operating officer after Sheryl Sandberg stepped down from the post

The National Food laboratory of FSSAI was Inaugurated in Raxaul, Bihar.