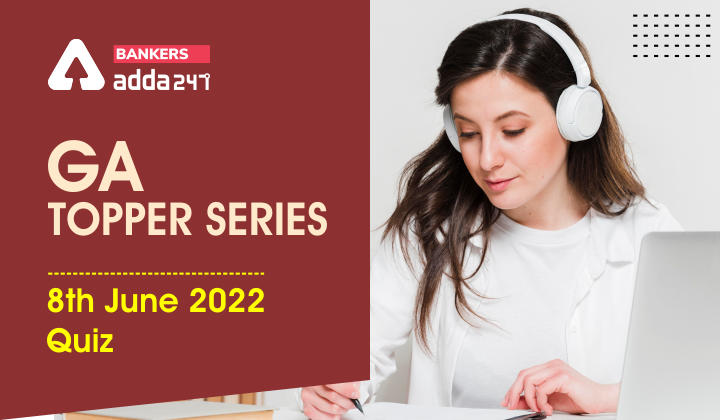 GA Topper Series: 8th June 2022 Quiz: Hello Students, all those students who have cleared their prelims exams in the banking sector must be prepared with every topic in the General Awareness Section for the mains examinations. Bankersadda team has brought you up a new series in which we will come up with 10 questions with the correct answer and the detailed solution to the question.

Q1. Recently “Biotech Startup Expo”  2022 was organized by the Department of Biotechnology, at which place?

Q2. What is the name of the eBook launched by the Income Tax Department?

Q3. Who is the first-ever Railway officer to complete the IRONMAN triathlon?

(a) Ministry of education

(b) Department of Science and Technology

Q5. Which of the following is not a UN language?

(b) Bureau of energy efficiency

Q7. Recently Prime Minister Modi launched a LiFE movement. What is the full form of LiFE?

(a) Lifestyle for the Environment

(b) Live for the Environment

Q9. Where was the world’s 1st population estimation of Fishing Cat was undertaken?

Q10. Which ministry has launched the Clean and Green campaign?

(a) Ministry of Rural development

(b) Ministry of Environment

Shreyas Hosur, Dy. FA&CAO © from South Western Railway has made Indian Railways proud by becoming the first-ever Railway officer and also the first-ever officer from the non-uniformed Civil Services to complete the grueling ‘IRONMAN’ Triathlon.

Zulfiquar Hasan appointed as the New DG of BCAS

This Portal facilitates entities engaged in map-related activities to certify themselves quickly and easily. The portal is built based on Geo-Spatial guidelines released by Govt of India in Feb 2021, which has de-regulated all aspects of mapping activities in India from survey to sales. The self-certification facility for entities in the portal is free and universal. Entities can be :

United Nations(UN)’s Russian Language Day is annually observed across the globe on June 6th to create awareness about the history, culture, and development of the Russian language. The day also aims to celebrate cultural diversity and multilingualism.

It is initiated by NSEFI with support from the German Solar Association (BSW) and the German Federal Ministry of Economic Cooperation and Development (BMZ) under the Sequa KVP Programme.

Prime Minister of India Narendra Modi launched the ‘Lifestyle for the Environment (LiFE) Movement’ via video conferencing, the idea of which was introduced to him during the 26th United Nations Climate Change (UNCC) Conference of the Parties (COP26) in Glasgow, Scotland in 2021. This launch resulted in the initiation of ‘LiFE Global Call for Ideas and Papers’ which invites individuals, universities, think tanks, non-profits, and others worldwide to submit behavior change solutions that can drive climate-friendly behaviors among individuals, communities, and organizations

On the occasion of World Environment Day, the Ministry of Housing & Urban Affairs (MoHUA) launched the “Clean and Green” campaign under which the States and Union territories and Urban Local Bodies across India will participate to make India free of single-use plastic