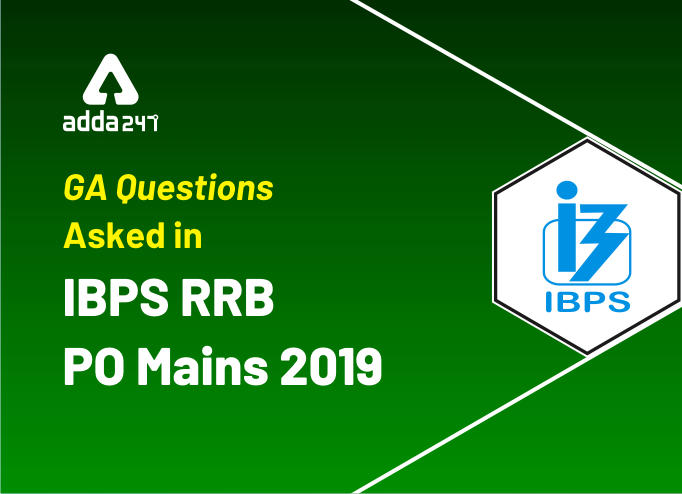 IBPS RRB PO Mains Exam is over now. Candidates who have attempted the IBPS RRB PO mains exam must be curious to know their performance in the examination. Bankersadda has come up with the General Awareness (GA) question with answers to help you deal with your performance analysis. These questions will help in your score analysis as well as it will also help in preparing for IBPS RRB Clerk mains exam which is to be held on 20th October 2019.

General awareness carries 40 question, each carries 1 mark. This means, general awareness has 40/200 weightage in the mains stage of IBPS RRB PO exam. Read the questions asked in the examination with solution below:

Q1. Who is the HRD Minister of India?
Answer. Shri Ramesh Pokhriyal ‘Nishank’

Q2. Name the country which will host the G20 summit in 2020.
Answer. Saudi Arabia

Q4. Amit panghal is related to which sport?
Answer. Boxing

Q8. Who has the authority to appoint Comptroller and Auditor General of India?
Answer. President of India

Q10. Where is the Headquarter of Organisation for Economic Co-operation and Development (OECD)?
Answer. Paris, France

Q11. Vikramjit sawhney is the president of which organization?
Answer. International Chamber of Commerce (ICC)- India

Q12. Which country is not the member of BRICS group?
Answer. Brazil, India, China and South Africa are the only members of BRICS group.

Q14. Which country is not the part of G7 group of countries?
Answer. The seven G7 countries are Canada, France, Germany, Italy, Japan, the UK and the US.

Q17. Who is the present President of the World Bank?
Answer. David Malpass

Q20. Electric Vehicles in India to get which colour number plates?
Answer. Green

Q21. Jaspal Rana is related to which sport?
Answer. Shooting

Q22. The Book “Coming Round the Mountain: In the Year of Independence” is written by?
Answer. Ruskin Bond

Q27. From which date the BS-VI fuel norms will be implemented in India?
Answer. April, 2020

Q28. According to the All India Tiger Estimation Report 2018, which state has 2nd highest number of tiger in India?
Answer. Karnataka

Q30. What is the cap on individual cash donation to political parties as Election Bond cash money?
Answer. Rs 2000

Q32. Name the organisation which celebrated the 100th anniversary of its establishment in 2019.
Answer. International Labour Organisation

Q33. One question was based on “Geographical Indication Tag”.
Answer.

Q35. Rani Rampal is associated with which sport?
Answer. Hockey

Q36. Which company topped the list of biggest company by revenue in the fiscal year 2018-19?
Answer. Reliance Industries

Q37. Name the Chinese app which was banned in April by high Court in India?
Answer. Tik Tok

Q38. The Inernational Convention on World Homoeopathy Day 2019 was organised by Central Council for Research in Homoeopathy in?
Answer. New Delhi

All the Best BA’ians for IBPS RRB Clerk!!