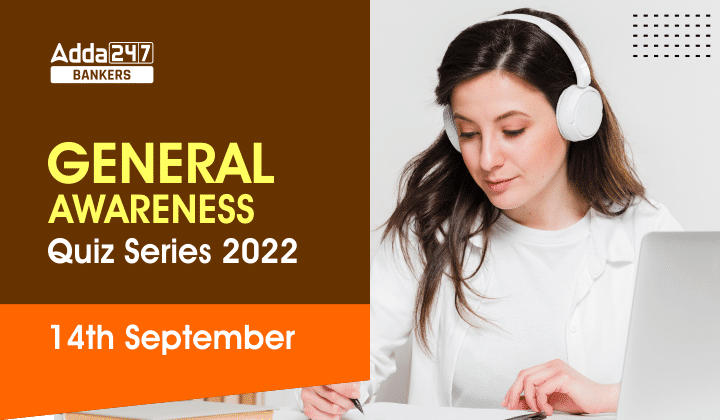 General Awareness Quiz Series 2022: 14th September: Hello Students, General Awareness is an essential part of all government exams. It’s better to prepare this section daily and revise the same using the factsheet provided. Bankersadda team has brought you up a new series in which we will come up with 10 questions and answers, other options of the question have related news to them. So don’t miss reading the solutions.

Q2. What is the name of the China’s first fully solar-powered unmanned aerial vehicle (UAV)?

Q4. What is the name of the third Stealth Figate of P17A which is launched by Indian Navy

Q5. Who has been appointed as the chairman of the Appellate Tribunal under Prevention of Money Laundering Act (PMLA)?

Q6. Who has won Formula One Italian Grand Prix ?

Q8. How many Gati Shakti Cargo terminals will be developed?

Q9. In which country 22nd Meeting of the Council of Heads of State of the Shanghai Cooperation Organization (SCO) is going to held?

Q10. How one can register for blood donation at launch Raktdaan Amrit Mahotsav?

China has successfully tested its first fully solar-powered unmanned aerial vehicle (UAV) named : Qimingxing-50, which can fly for months and can function even as a satellite if required.

The NASA researchers successfully launched CAPSTONE spacecraft to the moon from New Zealand.

Astronomers have found that the smallest of the mission’s Trojan asteroid targets, Polymele, has its own satellite.

Proxima Centauri is considered to be the star closest to Earth apart from the sun.

The Chief Justice of Madras High Court, Justice Mr. Munishwar Nath Bhandari has been appointed as Chairman of the Appellate Tribunal under the Prevention of Money Laundering Act (PMLA).

Former Chief Justice of India Kamal Narain Singh passed away on Thursday, September 8, at the age of 95

The Formula One Italian Grand Prix was won by Max Verstappen.

Delhi police : made mandatory for forsenics in crime where sentence is more than 6 years

PM Modi will be on a two-day visit to Samarkand in Uzbekistan from tomorrow to attend the 22nd Meeting of the Council of Heads of State of the Shanghai Cooperation Organization (SCO).

The registrations for the Raktdaan Amrit Mahotsav have begun on the E-Raktkosh portal and Aarogya Setu app. 1st October is observed as the National Voluntary Blood Donation Day.