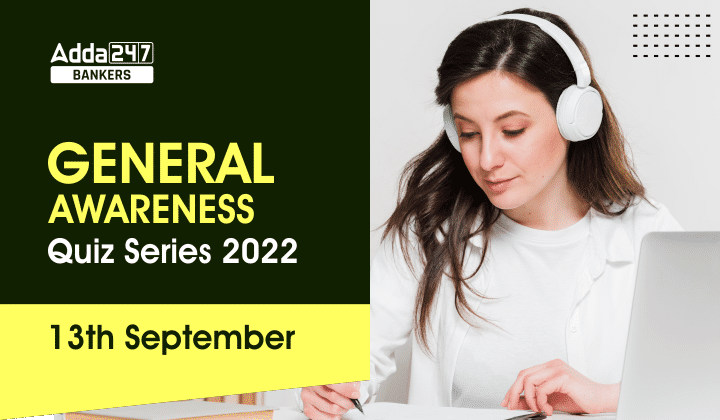 General Awareness Quiz Series 2022: 13th September: Hello Students, General Awareness is an essential part of all government exams. It’s better to prepare this section daily and revise the same using the factsheet provided. Bankersadda team has brought you up a new series in which we will come up with 10 questions and answers, other options of the question have related news to them. So don’t miss reading the solutions.

Q1.To connect Indian entrepreneurs with investor in USA, SETU initiative has been launched. What ‘S’ stands for in SETU?

Q2. Which of the pairs of author and books is not correct?

Q3. How many million credit and debit cards are tokenized by Phone Pe?

Q4. What is the name of the former chief justice who has passed away in September?

(a) All India Institute of Ayurveda

Q7. The project is known as ‘Kargil Ignited Minds’, and the project aims to prepare 50 girl students for various national-level engineering and medical entrance examinations is a combined CSR project of Indian Army and which PSU?

Q9. Which Financial Institution has committed Rs 125 crore over the next 5 years to support green causes like wetland conservation and energy transition projects in India?

Q10. The month of September is recognized as International PCOS Awareness Month. What is the fullform of PCOS?

The SETU(Supporting Entrepreneurs in Transformation and Upskilling) initiative was developed by Mr. Piyush Goyal, the minister of business and industry, to connect Indian entrepreneurs with investors in the US

Pavan C Lall, a veteran journalist, has written a new book titled ‘Forging Mettle: Nrupender Rao and the Pennar Story,‘ which will be released in September 2022.

According to the Reserve Bank of India’s (RBI) rules for data protection, PhonePe declared that it had tokenized 14 million credit and debit cards on its network.

Former director general of the Archaeological Survey of India (ASI) Braj Basi Lal Passed away at the age of 101 in Delhi.

Former Chief Justice of India Kamal Narain Singh passed away at the age of 95 in Prayagraj, Uttar Pradesh.

Hindustan Petroleum Corporation Ltd (HPCL) and the Indian Army have collaborated for implementing a CSR project to coach and mentor less privileged girl students in Kargil. The project is known as ‘Kargil Ignited Minds’, and the project aims to prepare 50 girl students for various national-level engineering and medical entrance examinations

Foreign lender Hongkong and Shanghai Banking Corporation Limited (HSBC) has committed Rs 125 crore over the next 5 years to support green causes like wetland conservation and energy transition projects in India.