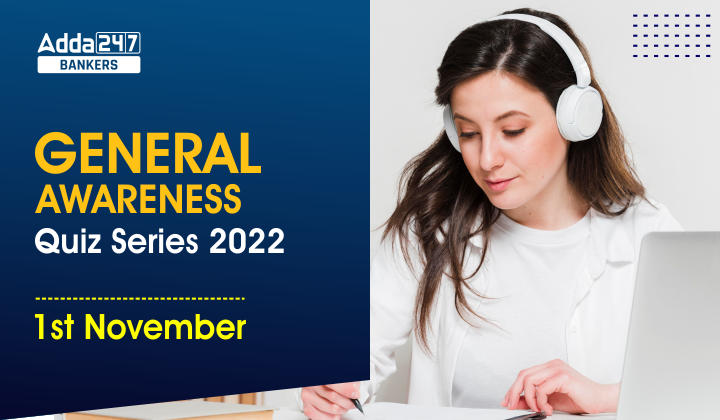 General Awareness Quiz Series 2022: 1st November: Hello Students, General Awareness is an essential part of all government exams. It’s better to prepare this section daily and revise the same using the factsheet provided. Bankersadda team has brought you up a new series in which we will come up with 10 questions and answers, other options of the question have related news to them. So don’t miss reading the solutions.

Q1. In which month India Water week is celebrated?

Q4. Which of the following campaign and their month is incorrect?

Q5. Which company of India is the first to conduct its eaning call proceeding on metaverse?

Q6. Who has been appointed as Chairman of Samsung Electronics Co?

Q7. The International Union of Geological Sciences (IUGS), one of the largest scientific organisations of UNESCO, has recognised the Mawmluh Cave as one of the first 100 IUGS geological heritage sites. It is located in which state?

In an effort to raise awareness, conserve and use water resources in an integrated manner, Ministry of Water Resources, River Development and Ganga Rejuvenation, Government of India is organizing the 7th edition of India Water Week (IWW) from 1st to 5th November

The theme of 7th India Water Week is “Water Security for Sustainable Development and Equity”. The five daylong events will bring together experts, planners and stake holders from across the globe.

The Income Tax Department participated enthusiastically in the Government of India’s month-long Special Campaign for Swachhata which ends on 31st October, 2022. This day (31st October) marks the birth anniversary of Sardar Vallabhbhai Patel and is also observed as the National Unity Day.

International Open Access Week is celebrated worldwide to create awareness about the open access scholarly publishing among researchers and publishers. It is celebrated globally during the last full week of October

Reliance Industries Limited (RIL) posted the proceedings of its Q2 FY 2022-23 earnings call on the metaverse. This is the first time in the history of corporate India that a company has used metaverse to engage with its stakeholders

The Reserve Bank has revoked certificate of authorisation of Chennai-based GI Technology Private Limited over governance concerns in the company. The company is in business of issuance and operation of prepaid payment instruments.

The International Union of Geological Sciences (IUGS), one of the largest scientific organisations of UNESCO, has recognised the Mawmluh Cave, located in the East Khasi Hills district of Meghalaya, as one of the first 100 IUGS geological heritage sites.

Bharat Petroleum Corporation Limited (BPCL), ‘Maharatna’ and a Fortune Global 500 Company has once again achieved the No.1 rank in the Indian oil and gas sector for its sustainability performance in the 2022 edition of the S&P Dow Jones Sustainability Indices (DJSI) Corporate Sustainability Assessment (CSA) rankings

Indian junior men’s hockey team defeated Australia to win the Sultan of Johor Cup 2022 in a shootout 5-4 after a 1-1 draw at the Taman Daya Hockey Stadium in Johor Bahru, Malaysia.