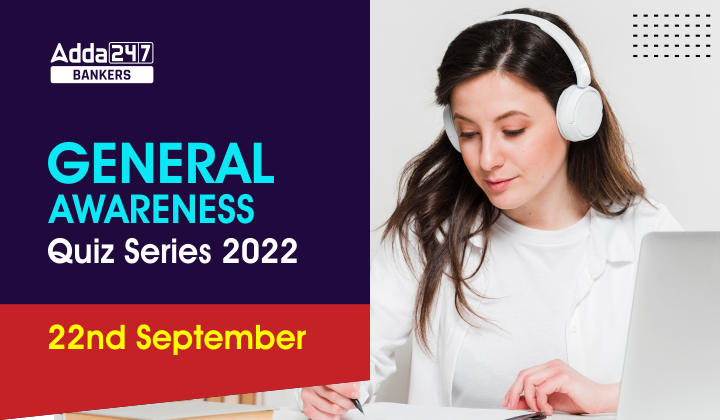 General Awareness Quiz Series 2022: 22nd September: Hello Students, General Awareness is an essential part of all government exams. It’s better to prepare this section daily and revise the same using the factsheet provided. Bankersadda team has brought you up a new series in which we will come up with 10 questions and answers, other options of the question have related news to them. So don’t miss reading the solutions.

Q1.The centre is planning to PM PRANAM scheme. This scheme is related to what ?

Q2. Who has been given the renowned Priyadarshni Academy Smita Patil Memorial Award for Best Actor?

Q3. Which of the following statements is not correct, these are news of September 2022?

(b) Federal Bank has launched the pilot for instant Kisan Credit Card (KCC), which facilitates agriculture loans in minutes.

Q4.which of the following is not a multinational naval exercise?

Q5. Raju Srivastava , a comedian recently died, what is his real name?

Q6. Which state is set to introduce “no-bag day”?

Q7. Who has won the SAFF Women’s Championship?

Q8. Whose tenure has been extended as the president of Asia-Pacific Institute of Broadcasting Development (AIBD)?

Q9. When Asia Pacific Institute for Broadcasting Development was formed ?

Q10. Which astronaut holds the record for the longest single stay in space?

The Centre is planning to launch the PM Promotion of Alternate Nutrients for Agriculture Management Yojana or PM PRANAM.

Some schemes launched in recent past

INSPIRE awards given to Entreprenueurs

Indian Naval Ship (INS) Satpura and P8I Maritime Patrol Aircraft have arrived in Darwin in Australia to participate in a multinational naval exercise, Kakadu 2022 (KA22) being hosted by the Royal Australian Navy.

Actor-comedian Satya Prakash Srivastava has passed away at the age of 58.

The Bihar government is set to introduce a “no-bag day” rule in schools and a mandatory games period at least once a week to reduce the burden on students.

Maharashtra: The state’s deputy chief minister, Devendra Fadnavis, revealed in a meeting that the Maharashtra government intends to create an organisation along the lines of Niti Aayog.

Bangladesh won a historic victory at the SAFF Women’s Championship to lift the maiden title at the Dashrath Rangshala Stadium in Kathmandu, Nepal. The Bangladesh team defeated hosts Nepal by 3-1 in the finals before a full stadium to watch some brilliant football on display.

India’s Presidency of the Asia-Pacific Institute of Broadcasting Development (AIBD), has been extended for one more year. The Chief Executive Officer of Prasar Bharati and Director General of Doordarshan Mayank Kumar Agrawal is the President of AIBD.

AIBD stands for Asia Pacific Institute for Broadcasting Development. The AIBD was formed in the year 1977. It is an inter-governmental organization of the Union Nations Economic and Social Commission for Asia and the Pacific. AIBD works in the field of electronic media development and currently has 26 countries as complete members represented by 43 organizations and 52 affiliate members. The AIBD is hosted by the Government of Malaysia and the secretariat is located in Kuala Lumpur.

Russian Cosmonaut Valery Vladimirovich Polyakov, who holds the record for the longest single stay in space, has Passed away at the age of 80.