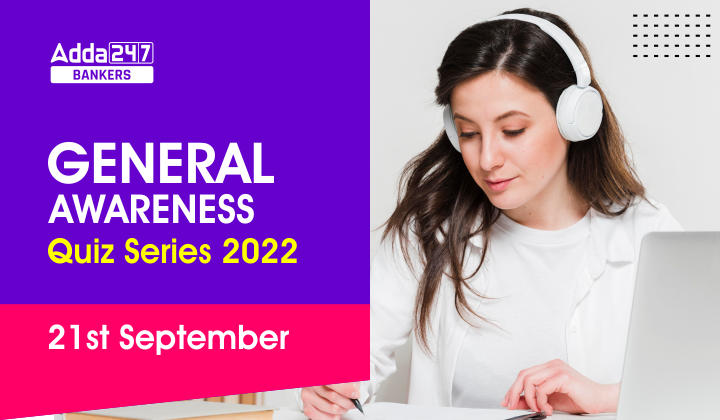 General Awareness Quiz Series 2022: 21st September: Hello Students, General Awareness is an essential part of all government exams. It’s better to prepare this section daily and revise the same using the factsheet provided. Bankersadda team has brought you up a new series in which we will come up with 10 questions and answers, other options of the question have related news to them. So don’t miss reading the solutions.

Q1. What is the new name given to Daulatpur Fort ?

Q3. ”Door se Namaste” series is launched by which of the following:

Q4.How much amount of the loan which has been sanctioned by world bank to support India’s efforts for providing social assistance?

Q5. Which Indian Film has been announced as India’s official entry to the Oscars 2023?

Q6. Which country have successfully cloned wild Arctic Wolf for the first time?

Q7. Match the festivals with their states:

Q8. Recently Criminal Procedure (Identification) Act, 2022 was implemented, it repeals which of the following act?

(b) Identification of Prisoners Act, 1920

Q9. Between which two cities , India’s longest river cruise service is going to be started in 2023?

(a) Allahabad to Kolkata

(b) Delhi to Bogibeel

Q10. Indian Navy decommissions INS Ajay at Naval Dockyard, Mumbai after 32 years of service. What S stands for in INS?

Maharashtra Tourism Ministry has decided to rename the Daulatabad fort to Devgiri which is located near Aurangabad. This decision comes after Shiv Sena Chief Uddhav Thackeray. It is a national heritage monument, which is maintained by the Archeological Survey of India (ASI). Previously Maharashtra’s former Chief Minister Uddhav Thackeray was renamed Aurangabad Sambhajinagar

The US Agency for International Development and UNICEF launched the Doordarshan and YouTube series titled “Door Se Namaste” at a function held in New Delhi. A theatrical film on Duur Se Namaste was screened at the event, taking the audience through the main story, and showing how the messages of vaccine promotion and COVID-19 Appropriate Behaviour (CAB) have been interwoven in the entertainment education series.

The World Bank approved a USD 1 billion loan to support India’s efforts for providing social assistance to the poor and vulnerable households, severely impacted by the COVID-19 pandemic.

The Gujarati film Chhello Show has been announced as India’s official entry to the Oscars 2023.

Developed by: MGM Healthcare. ➢ Purpose: To transport organs up to a distance of 20km initially

Scientists in China have successfully cloned wild Arctic Wolf for the first time, to prevent the endangered species from going extinct.

50th All Manipur Shumang Leela Festival 2021-2022 has been held. The festival began in Imphal.

India’s “longest river cruise service” (4,000 km) between Varanasi (UP) and Bogibeel (Assam) to start in 2023 announced by the Shipping Minister Sarbananda Sonowal

INS Ajay (P34) was an Abhay-class corvette, in service with the Indian Navy. She was named for INS Ajay (1961), the first warship built in independent India

A corvette is a small warship.