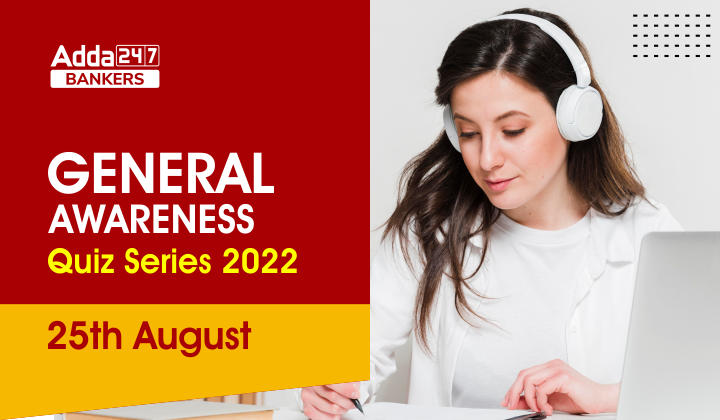 General Awareness Quiz Series 2022: 25th August: Hello Students, General Awareness is an essential part of all government exams. It’s better to prepare this section daily and revise the same using the factsheet provided. Bankersadda team has brought you up a new series in which we will come up with 10 questions and answers, other options of the question have related news to them. So don’t miss reading the solutions.

Q1. Coalition for Disaster Resilient Infrastructure (CDRI) was launched by Prime Minister of India in which year?

Q3. Akshya Patra Foundation signed MOU with which of the following to promote balanced and healthy diets through the sustainable production and consumption of climate-resilient and nutritious millet in various feeding programme and integration of millets under Pradhan Mantri Poshan Shakti Nirman (PM POSHAN)?

Q5.Which state/s had launched the ‘Digital Lok Adalat’ in the respective states?

(b) Rajasthan and Maharashtra

(c) UP and Rajasthan

Q6. Which among the following awards is not awarded to  Ukrainian President Volodymyr Zelensky?

Q7. In which of the following military drills, USA is not the member?

Q8. Which PSU has established first of its kind Waste-to-Energy portfolio?

Q9. In August 2022, India recently inaugurated the new Indian Embassy in which country?

Q10. Which state has announced to set up online monitoring system of medicines in government-run medical institutions?

The CDRI was launched by India’s Prime Minister (PM), Narendra Modi, on September 23, 2019, during the United Nations Climate Action Summit in New York, United States (US).

Akshaya Patra Foundation (APF) signed a memorandum of understanding (MoU) with Nutrihub, a technology Business Incubator hosted by the Indian Council of Agricultural Research (ICAR)-Indian Institute of Millets Research (IIMR) to promote balanced and healthy diets through the sustainable production and consumption of climate-resilient and nutritious millet in various feeding programme and integration of millets under Pradhan Mantri Poshan Shakti Nirman (PM POSHAN).

The government of Uttar Pradesh (UP) is set to build India’s First Education Township with the idea of ‘Single Entry, Multiple Exit’

The State Legal Services of Rajasthan and Maharashtra authorities had launched the ‘Digital Lok Adalat’ in the respective states as part of the third National Lok Adalat of 2022. Rajasthan and Maharashtra became the first states to use end-to-end digital platforms during the third National Lok Adalat of the year 2022, which highlighted over 75 lakh cases settled across India including 16.45 lakh pending and 58.33 lakh pre-litigation cases

The 2022 Liberty Medal is set to be awarded to Ukrainian President Volodymyr Zelensky. He will be honoured at the National Constitution Centre (NCC), Philadelphia, the United States(US) in October 2022

He was also been the recipient of awards

South Korea and the United States began their largest joint military drills in years with a resumption of field training. The annual summertime exercise has been renamed ‘Ulchi Freedom Shield’.

HPCL Compressed Biogas Project: HPCL’s uses first of its kind Waste-to-Energy portfolio, uses 100 tonnes of dung per day to make biogas, which may be used as vehicle fuel.

India’s Union External Affairs Minister S Jaishankar jointly inaugurated the new Indian Embassy in Asuncion in Paraguay with his counterpart.
This is the first ever visit of an Indian Foreign Minister to the Republic of Paraguay which has taken place as the two countries completed the 60th anniversary of the establishment of diplomatic relations.