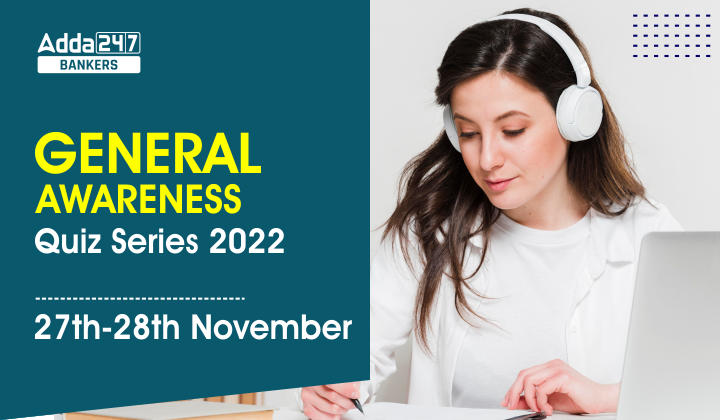 General Awareness Quiz Series 2022: 27th-28th November: Hello Students, General Awareness is an essential part of all government exams. It’s better to prepare this section daily and revise the same using the factsheet provided. Bankersadda team has brought you up a new series in which we will come up with 10 questions and answers, other options of the question have related news to them. So don’t miss reading the solutions.

(a) Archaeological Survey of India

(c) Ministry of Law and Justice

Q3. With a 77 per cent approval rating, Prime Minister Narendra Modi continues to be the most well-liked president in the entire world. Who came second?

Q4. AMLAN (Anaemia Mukta Lakhya Abhiyan) a multi-pronged approach in a bid to ensure the complete eradication of the anaemia problem among women and children is launched by which State Government?

Q5. Which company becomes the first company in India to bag the license for setting up a private agricultural mandi at Dindori, in Nashik district, Maharashtra?

(b) None of these

Q9. What is name of the Intermediate Range Ballistic Missile which is launched from APJ Abdul Kalam Island in Odisha?

Q10. In which state Sukhatal Lake and Naini Lake are located?

According to the Times Higher Education Global Employability University Ranking and Survey (GEURS), the Indian Institute of Technology (IIT) in Delhi is placed 28th. It is the only indian Institute which came under 50 ranks of survey.

Indian Institute of Technology (IIT) Bombay is the best educational education in Southern Asia while IIT Delhi ranks second in the region, according to the QS Asia University Rankings 2023.

In New Delhi, Union Education & Skill Development Minister Shri Dharmendra Pradhan launched the book ‘India: The Mother of Democracy,’ which was prepared and published by the Indian Council of Historical Research (ICHR).

Other books in News

Gautaam Borah, a senior management professional and the author of the widely acclaimed book ‘Monetising Innovation’, launches his new book ‘Nalanada – Until we meet again’.

Two books on the achievements and legacy of Prime Minister Narendra Modi were released by Minister of State for Skill Development and Entrepreneurship Rajiv Chandrashekhar in Dubai. These “Modi@20: Dreams Meet Delivery” and “Heartfelt: The Legacy of Faith”.

With a 77 per cent approval rating, Prime Minister Narendra Modi continues to be the most well-liked president in the entire world.

The Indian PM is followed by Mexican President Andrés Manuel López Obrador at 69 per cent and Australian PM Anthony Albanese at 56 per cent, on the second and third spots, respectively. US President Joe Biden and UK’s new PM Rishi Sunak come lower down the list with approval ratings of 41 per cent and 36 per cent, respectively.

This was revealed in a Global Leader Approval Ratings released by a US based consulting firm Morning Consult.

The Odisha chief minister Shri Naveen Patnaik announced a special package for the welfare of 8 lakh Kendu leaf pluckers and other persons engaged in the trade.

The Sangai Festival of Manipur begins, it is the largest tourism festival in Manipur. The festival is named after the State Animal which is found only in Manipur have been organized grandly this time after the COVID-19 pandemic hit the festival in the last two years.

The Sahyadri Farmer Producer Company (FPC) becomes the first company in India to bag the license for setting up a private agricultural mandi at Dindori, in Nashik district, Maharashtra.

Canara Banks steps into digital banking on its 117th Founder’s Day with the issuance of an Electronic Bank Guarantee (e-BG) in partnership with National E-Governance Service Limited.

India has invited Egyptian President Abdel Fattah el-Sisi as the chief guest for the Republic Day in 2023, reflecting New Delhi’s continuing focus on the Arab world.

Dr. Mohamed Irfaan Ali, President of the Cooperative Republic of Guyana, will be the Chief Guest at the 17th Pravasi Bharatiya Divas (PBD) Convention which will be held from 8-10 January 2023 at Indore, Madhya Pradesh,” the Ministry of External Affairs (MEA) said in a statement.

Zaneta Mascarenhas:  Member of Parliament of Australia, will be the guest of honour at the Youth Pravasi Bharatiya Divas which will be held on 8th January next year.

Life Insurance Corporation of India (LIC) has announced an increase in stake in Tech Mahindra Limited from 4.863% to 6.874%.

The Uttarakhand high court has banned all construction activities in the dry area around the Sukhatal lake, a rain-fed water body that recharges the Naini lake.