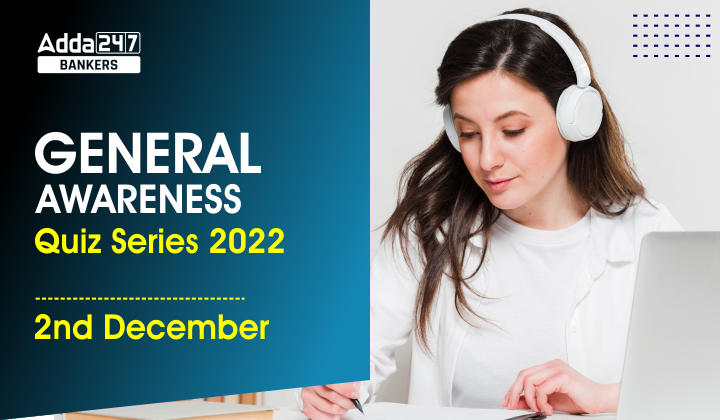 General Awareness Quiz Series 2022: 2nd December: Hello Students, General Awareness is an essential part of all government exams. It’s better to prepare this section daily and revise the same using the factsheet provided. Bankersadda team has brought you up a new series in which we will come up with 10 questions and answers, other options of the question have related news to them. So don’t miss reading the solutions.

Q1. Who has successfully tested a hydrogen-powered aircraft engine, which is described as the World’s First for aviation?

Q5. Phoenix Kothari Footwear Park is going to be built in which state?

Q6. Miss Earth 2022 was won by Mina Sue Choi of South Korea. Its which edition of the Miss Earth?

Q7. Which bank has planned to raise Rs 10,000 crore worth of infrastructure bonds during current financial year?

Q9. What is the name of the first female referee of men’s FIFA World cup ?

Q10. Which of the following days is not celebrated on December 2?

Airline EasyJet and Aircraft Engine maker Rolls-Royce announced that they have successfully tested a hydrogen-powered aircraft engine, which is described as the World’s First for aviation.

The world economy may be slowing but India’s richest have grown even richer this year. The Forbes 2022 list of India’s 100 richest is finally here

News Broadcaster New Delhi Television Ltd (NDTV) promoter firm RRPR Holding announced that it has transferred shares constituting 99.5 percent of its equity capital to Adani group-owned Vishvapradhan Commercial (VCPL). The transfer of shares will give Adani Group control over a 29.18 percent stake in NDTV. They are also open to offer for another 26 percent stake in the media film.

Miss Earth 2022 was the 22nd Miss Earth pageant, held on November 29, 2022 at the Okada Manila in Parañaque, Metro Manila, Philippines. Destiny Wagner of Belize crowned Mina Sue Choi of South Korea as her successor at the end of the event.

Miss Fire 2022 is Andrea Aguilera of Columbia, Miss Water 2022 is Nadeen Ayoub of Palestine, and Miss Air 2022 is Sheridan Mortlock of Australia

TurtleFin, India’s leading insurtech platform, has partnered with YES BANK, one of the leading private sector banks in India, to create a comprehensive technology platform EasyNsure.

Nanda Devi is the second-highest mountain in India, after Kangchenjunga, and located entirely within India (Kangchenjunga is on the border of India and Nepal). It is in the state of Uttarakhand (Chamoli district). It is the 23rd-highest peak in the world. The Nanda Devi Peak is a part of the Garhwal Himalayas.

Jiang Zemin, former President of China who presided over more than a decade of economic growth after the 1989 Tiananmen crackdown against pro-democracy protester

A senior journalist, Ravish Kumar has resigned from NDTV according to news sources.

CEO & CCO of McCann Worldgroup India, Prasoon Joshi has been appointed by Uttarakhand Government as the state’s brand ambassador.

National Pollution Control Day is observed every year on 2 December in India. The day is recognized to commemorate the precious lives that were lost in the Bhopal Gas Tragedy.

December 2 is observed as International Computer Literacy Day. It was started in 2001 by NIIT, a world-famous Indian computer firm.

The International Day for the Abolition of Slavery is celebrated, each year, on December 2.