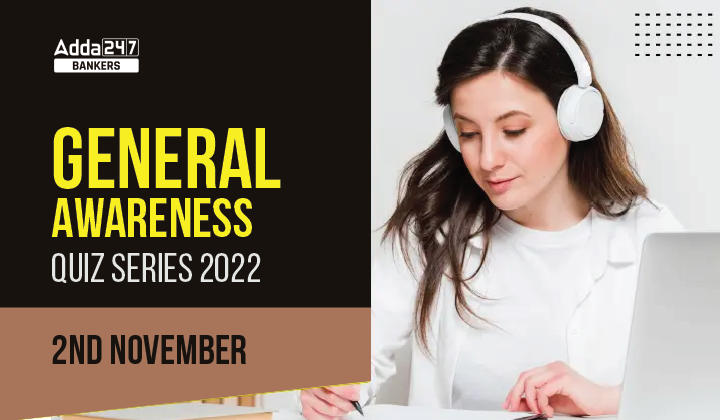 General Awareness Quiz Series 2022: 2nd November: Hello Students, General Awareness is an essential part of all government exams. It’s better to prepare this section daily and revise the same using the factsheet provided. Bankersadda team has brought you up a new series in which we will come up with 10 questions and answers, other options of the question have related news to them. So don’t miss reading the solutions.

Q1. What is the name of the latest tiger reserve in Uttar Pradesh?

Q2. Consider the following statements about WHO released the Global TB Report 2022:

Which statement is correct?

Q3. Amou Haji has been dubbed as the dirtiest man in the world died recently. He was citizen of which country?

Q4. Who has been popularly called ‘Dhwani Kobi’?

Q5. When All souls day is observed?

Q6.Which program has won the SKOCH award for women and child development?

(b) Tourism for women

Q7. Which company is the first to import 25 kg of gold as part of the Comprehensive Economic Partnership Agreement (CEPA) between India and the UAE?

Q8. Who has been appointed as the first ever woman director to Indian Council of Agricultural Research -Sugarcane Breeding Institute (ICAR – SBI) in Coimbatore?

Q9. Which of the following is not a participant of IMT TRILAT, a joint maritime exercise?

Q10. Which of the following is the worlds biggest employer according to Statista report?

(a) Ministry of Railways

(b)  Ministry of Defence

Ranipur is the latest Tiger Reserve

India’s TB incidence for the year 2021 is 210 per 100,000 population – compared to the baseline year of 2015 (incidence was 256 per lakh of population in India); there has been an 18% decline which is 7 percentage points better than the global average of 11%. These figures also place India at the 36th position in terms of incidence rates i.e. from largest to smallest incidence numbers.

Amou Haji, an Iranian man dubbed the “dirtiest man in the world, “ died at the age of 94 in the village of Dejgah, in the southern province of Fars. He was so-called because he had not washed for almost 70 years and he believed that staying dirty kept him alive for so long. Owing to his unique record, a short documentary titled ‘The Strange Life of Amou Haji’ was made in 2013, describing his life.

Jamshed J Irani, also known as the “Steel Man of India”, passed away aged 86 at Tata Main Hospital in Jamshedpur.

The Lakshmir Bhandar program of the West Bengali government won the SKOCH award for women and child development.

YUVA 2.0 programme: The Prime Minister’s Scheme for Mentoring Young Authors, known as YUVA 2.0 (Young, Upcoming and Versatile Authors), was launched by the Department of Higher Education of the Ministry of Education on October 2.

Malabar Gold and Diamonds, a major retailer of jewelry in India, is the first jeweler to import 25 kg of gold as part of the Comprehensive Economic Partnership Agreement (CEPA) between India and the UAE.

India’s Ministry of Defence is the world’s biggest employer with 2.92 million people, which includes combined active service personnel, reservists and civilian staff, according to a report in ‘Statista’.