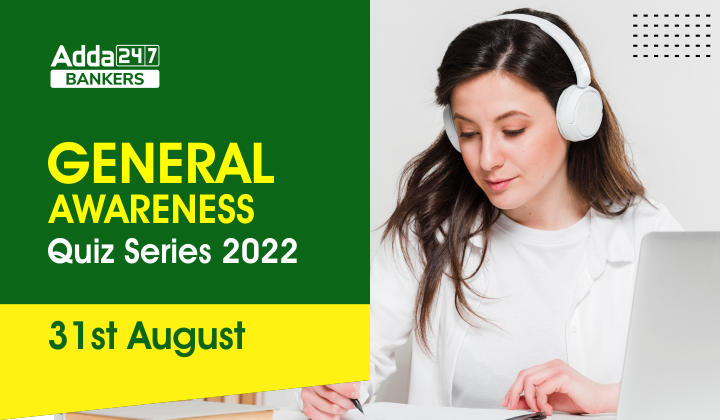 General Awareness Quiz Series 2022: 31st August: Hello Students, General Awareness is an essential part of all government exams. It’s better to prepare this section daily and revise the same using the factsheet provided. Bankersadda team has brought you up a new series in which we will come up with 10 questions and answers, other options of the question have related news to them. So don’t miss reading the solutions.

Q2. The largest religious monument in the world, the Temple of Vedic Planetarium in West Bengal will serve as the headquarters of which instirtute?

Q3. According to a survey by Brand Finance Insurance 100 2021, a London-based brand valuation consultancy organization, Which organisation emerged as the third strongest and tenth most valuable insurance brand globally?

Q4. With which country’s Air Navigation Services an MoU is signed for newest generation of environmentally friendly aviation technology?

Q6. Who has been appointed as the Executive Director for India at the International Monetary Fund (IMF)?

Q10. Who has become the first-ever fast bowler to complete 950 wickets in international cricket?

Kannuj will be developed into a tourist destination as per the decision taken by the Government of Uttar Pradesh.

North-east state, Nagaland got its second railway station after a gap of more than 119 years with the commissioning of a new facility at Shokhuvi

The Chhattisgarh government will set up rural industrial parks in the state. In the first year of the project, there will be 300 such parks.

The largest religious monument in the world, the Temple of Vedic Planetarium in West Bengal, which will serve as the headquarters of the International Society of Krishna Consciousness (ISKCON).

India has now overtaken China and UK to become the world’s 10th largest life insurer. According to a survey by Brand Finance Insurance 100 2021, a London-based brand valuation consultancy organization, Life Insurance Corporation (LIC), a state-owned insurance behemoth and life insurer has emerged as the third strongest and tenth most valuable insurance brand globally.

At the AAI Corporate Headquarters in New Delhi, the LFV Air Navigation Services of Sweden and the Airports Authority of India (AAI) signed a Memorandum of Understanding. In order to investigate smart aviation solutions, the agreement between Sweden and Airports Authority of India (AAI) brings together two air navigation service providers, India and Sweden, who have a track record of developing and implementing the newest generation of environmentally friendly aviation technology.

L&T Technology Services, a provider of high-end engineering services, recently announced that European luxury automaker BMW Group had awarded it a five-year, multi-million dollar contract to supply high-end engineering services for its suite of infotainment consoles intended for its family of hybrid vehicles. According to a statement from the firm, the engineers on the LTTS team will offer services in the areas of software build and integration, infotainment validation, and defect management.

KV Subramanian was appointed as the Executive Director for India at the International Monetary Fund (IMF).

Santosh Iyer will take over as managing director and chief executive officer of Mercedes-Benz India’s operations on January 1, 2023. Martin Schwenk will be replaced by Santosh Iyer.

IDFC Ltd board has approved the appointment of Mahendra N Shah as managing director-designate of the company with effect from October 1.

DreamSetGo, a sports experiences and travel platform, has announced Sourav Ganguly as its first brand ambassador.

Atal Innovation Mission (AIM) and NITI Aayog will be establishing more than 500 Atal Tinkering Labs (ATLs) in Jammu and Kashmir to nurture an innovative mindset among high school students.

23-year-old Divita Rai from Karnataka won the prestigious title of Miss Diva Universe 2022. She was crowned by the reigning Miss Universe 2021, Harnaaz Sandhu, at a lavish ceremony that celebrated the 10th anniversary of the coveted pageant. At the 71st Miss Universe pageant, Rai will be representing India, where Harnaaz Sandhu was crowned as the winner last year. Pragnya Ayyagari of Telangana was declared Miss Diva Supranational 2022.